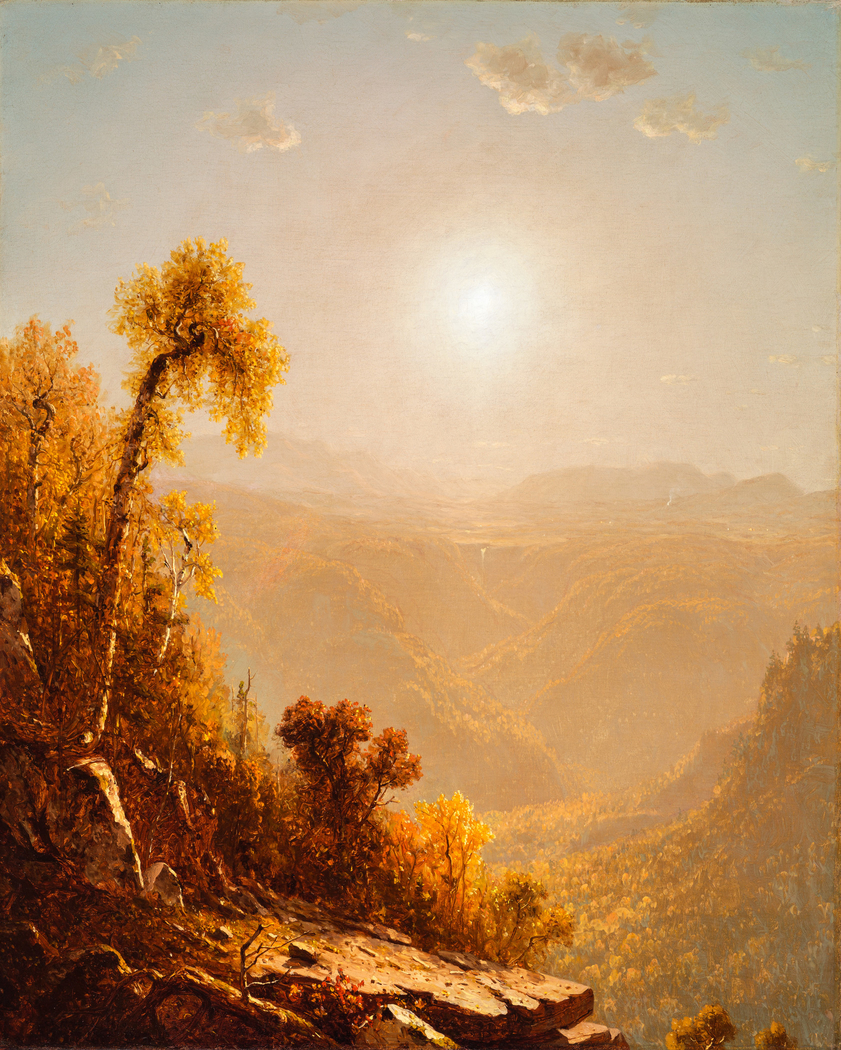 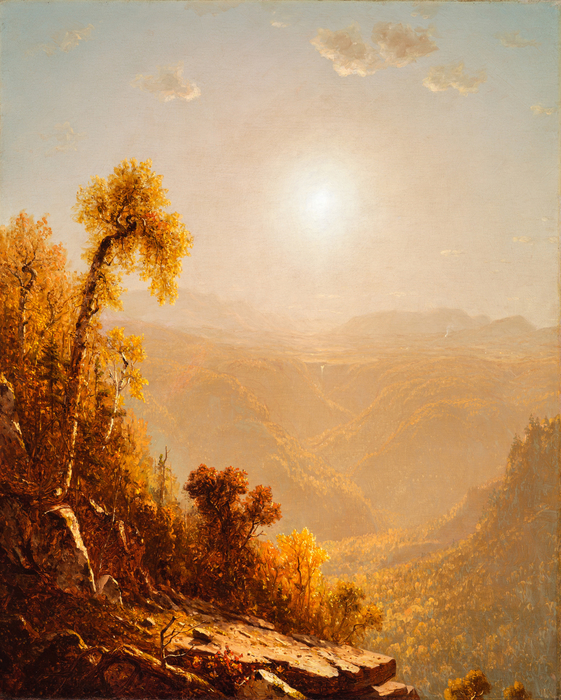 October in the Catskills

1880
In his address given at the memorial for Sanford Gifford, Worthington Whittredge said that no autumn came that Gifford did not visit his mother in the town of Hudson and the nearby Catskills. He loved the mountains and painted them more than any other subject. The motif of this painting is the Kaaterskill, or Kauterskill, Clove, a scenic gorge of the small Kaaterskill Creek that extends about five miles between Haines Falls village and Palenville. It was a theme for numerous Hudson River school artists, and Gifford sketched there as early as 1845 and exhibited a painting of the clove. From this direct study, possibly together with others, he completed both the wellknown Kauterskill Clove, 1862 (Metropolitan Museum of Art, New York), and the museum’s painting October in the Catskills, eighteen years later.

The artist was known for repeating favorite subjects with slight refinements. The true subject of the painting is the lighted atmosphere that fills a great natural bowl, as in some of his other paintings. "With Mr. Gifford, landscape, painting is air-painting," wrote George Sheldon in 1879 (American Painters [New York: D. Appleton], p. 17). By sacrificing distant detail to the palpable, shimmering atmosphere, as in the museum’s painting, Gifford achieved a poetic interpretation of impressions that the motif and nature in general had made on him. In this spirit he freely arranged and modified elements in his finished paintings, which were studio creations.

A comparison with the Metropolitan Museum’s Kauterskill Clove shows how Gifford marshaled his materials in October in the Catskills for an entirely different effect and feeling. The vantage point is higher, eliminating the view of the lake but increasing awareness of the plain and mountains stretching into the distance. The artist has also moved the trees and rocks on the left from the near foreground to the immediate foreground. The combined effect of these changes is to substitute, for the gentle progression into the distance in the Metropolitan Museum’s painting, a dramatic leap from a bulky, immediate foreground almost directly into the uninhabited far distance. This was a device often used by ALBERT BIERSTADT to enhance an impression of overwhelming distance. Also different is the quality of light in the two paintings. Kauterskill Clove is bathed in a delicate combination of yellows and blues, whereas the light in October in the Catskills is described by much hotter yellows and reds, emanating from a visible sun that seems to ignite the foreground foliage. Gifford has rearranged the ridges of the clove in a more regular arrangement that seems to center upon the sun. The sun is a potent force in the painting, appearing to dissolve the distant mountains into something like the vortices that swirl within the landscapes of J. M. W. Turner (1775-1851). The distance is defined entirely in terms of the action of the sun, reflecting in the waterfall and tiny distant houses. The overall impression is that of a powerful force in a vast primeval wilderness. A very similar painting of the same subject, dimensions, and date, but with the foreground rocks and trees reversed on the right side of the canvas, appeared on the art market in New York (see Related Works). It cannot be determined whether the provenance and early citations in the 1881 Memorial Catalogue refer to the museum’s painting or this other one. [source]