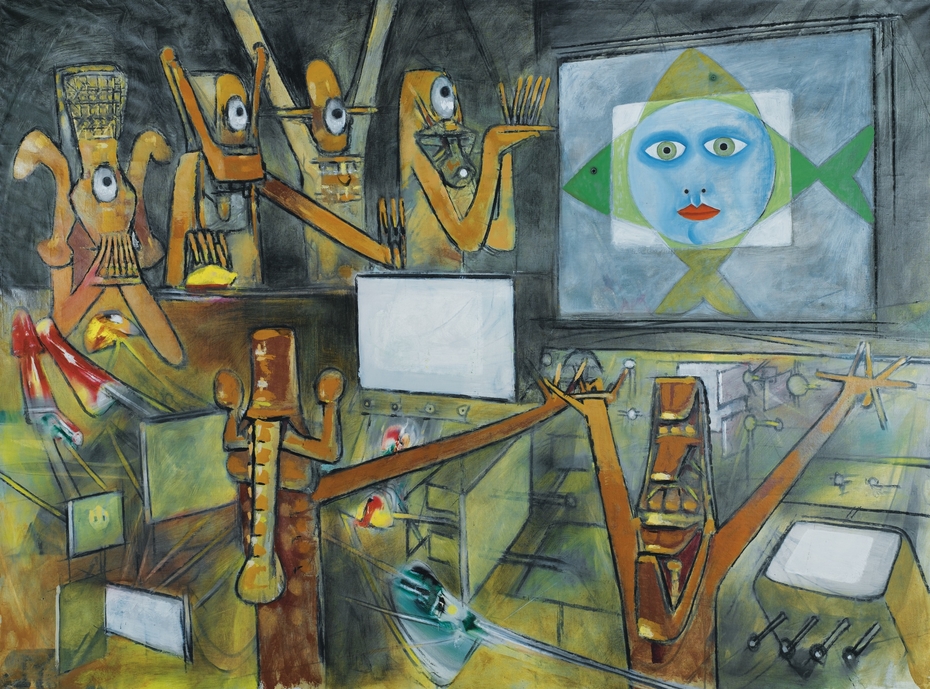 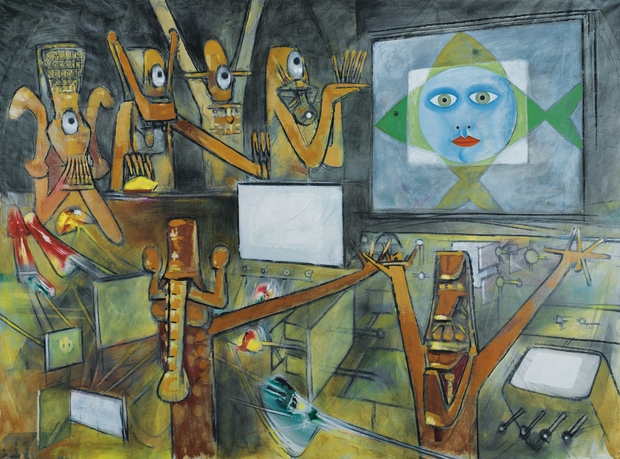 "This monumental canvas was conceived as a collaborative project between Roberto Matta and Victor Brauner in 1956, as a pendant to the first picture they created together the previous year, Intervision (today housed in the Musée National d’Art Moderne). Both paintings were exhibited at the Galerie Dragon in Paris in 1956. In keeping with the Surrealist tradition of “cadavre exquis”, in which words or images are collectively and organically assembled following an agreed set of rules, in these two collaborations, Matta and Brauner powerfully juxtaposed their individual pictorial styles to create a unique vision of the modern world.

By the 1950s Roberto Matta was working increasingly in large formats, influenced by the cinema and by the prevailing new media of television. The effect of technological advances and the advent of televised age on human experience is the dominant theme in the two works he created with Brauner, which are both dominated by large screens. Indeed, the screen serves to structure these works, dividing the pictorial space and delineating the contribution of each artist. In Intervision, the surging anthropomorphic image on the screen was painted by Matta while Brauner created the “audience” of engrossed multi-coloured spectators. However in Innervision, the roles are symbolically reversed, with Brauner responsible for the placid blue moon-face staring out from the screen framed by enigmatic marine creatures, while Matta paints a crowd of six cyclopses in a mechanical interior who, rather than watching passively, seem to react with violent gestures. The contrasting dynamic and role reversal in the two works raises questions about man’s response to technology and the ambiguous balance of power between the transmitter and the receiver. The prevailing mood in Innervision is one of paranoia and alarm, enhanced by the deliberately disquieting divergence between the work of the two artists.

While Intervision was donated by Jacqueline Brauner to the Centre Pompidou, Innervision remained in his private family collection has never before been presented at auction. "
source: Sotheby's

License:
Image may be subject to copyrights
For more:
http://www.sothebys.com/en/auctions/ecatalogue/2015/art-imp…