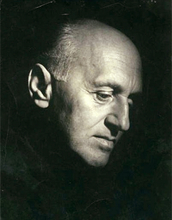 Victor Brauner was born on June 15, 1903, in Piatra-Neamt, Romania. His father was involved in spiritualism and sent Brauner to evangelical school in Braïla from 1916 to 1918. In 1921 he briefly attended the School of Fine Arts in Bucharest, where he painted Cézannesque landscapes. He exhibited paintings in his subsequent expressionist style at his first solo show at the Galerie Mozart in Bucharest in 1924. Brauner helped found the Dadaist review 75 HP in Bucharest. He went to Paris in 1925 but returned to Bucharest approximately a year later. In Bucharest in 1929 Brauner was associated with the Dadaist and Surrealist review UNU.

Brauner settled in Paris in 1930 and became a friend of his compatriot Constantin Brancusi. Then he met Yves Tanguy, who introduced him to the Surrealists by 1933. André Breton wrote an enthusiastic introduction to the catalogue for Brauner’s first Parisian solo show at the Galerie Pierre in 1934. The exhibition was not well-received, and in 1935 Brauner returned to Bucharest, where he remained until 1938. That year he moved to Paris, lived briefly with Tanguy, and painted a number of works featuring distorted human figures with mutilated eyes. Some of these paintings, dated as early as 1931, proved gruesomely prophetic when he lost his own eye in a scuffle in 1938. At the outset of World War II Brauner fled to the South of France, where he maintained contact with other Surrealists in Marseilles. Later he sought refuge in Switzerland; unable to obtain suitable materials there, he improvised an encaustic from candle wax and developed a graffito technique.

Brauner returned to Paris in 1945. He was included in the Exposition internationale du surréalisme at the Galerie Maeght in Paris in 1947. His postwar painting incorporated forms and symbols based on Tarot cards, Egyptian hieroglyphics, and antique Mexican codices. In the fifties Brauner traveled to Normandy and Italy, and his work was shown at the Venice Biennale in 1954 and in 1966. He died in Paris on March 12, 1966.
source: Guggenheim Museum