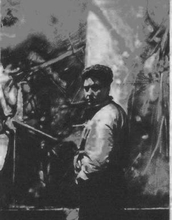 Chilean Surrealist painter and sculptor. Roberto Sebastian Antonio Matta Echaurren, often known simply as Matta. Born in Santiago, Chile, of mixed Spanish and French descent. Studied architecture at the Catholic university in Santiago, then lived from 1933 in Paris, also travelling in Germany, Austria, Spain, etc. Worked in Le Corbusier's Paris office 1934-7. Was introduced by Lorca to Dali in 1937, and by Dali to Breton. Joined the Surrealist movement, and made his first coloured drawings in 1937, his first oil paintings in 1938. Scenes of continuous metamorphosis evoking fantastic subjective landscapes. Moved in late 1939 to New York, where he had his first one-man exhibition in 1940 at the Julien Levy Gallery. Became friendly with Gorky, Motherwell, Pollock, Baziotes and encouraged them to experiment with automatic techniques. From 1944-5 began to create spatial tensions in deep space and to introduce fantastic anthropomorphic personages into his work. Thenceforth made many paintings, some very large, on the theme of man's precarious existence in a world dominated by machines and hidden forces. Returned to Europe 1948; lived in Rome 1950-4, then mainly in Paris. Made his first sculpture in 1957. Awarded the Marzotto Prize in 1962 for 'La Question Djamila', a picture inspired by allegations of torture in Algeria. Lives in Paris.

Published in:
Ronald Alley, Catalogue of the Tate Gallery's Collection of Modern Art other than Works by British Artists, Tate Gallery and Sotheby Parke-Bernet, London 1981, p.502