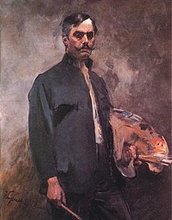 Wojciech Kossak (Paris, France, 31 December 1856 – 29 July 1942, Kraków, Poland) was a noted Polish painter and member of the celebrated Kossak family of artists and writers. He was the son of painter Juliusz Kossak, and twin brother of freedom fighter Tadeusz Kossak, and the father of two highly talented literary daughters, Maria Pawlikowska-Jasnorzewska and Magdalena Samozwaniec and of a painter son, Jerzy Kossak.

Wojciech Horacy Kossak was born on New Year's Eve of 1856 just before midnight, while his twin brother, Tadeusz Kossak, just after, on 1 January 1857, in Paris. The family eventually left France. His middle name was in honour of his godfather, French painter Horace Vernet. Kossak began his education upon his family's return to Poland. He went to middle school at Three Crosses Square in Warsaw and later attended high school, the Gimnazjum św. Anny, in Kraków. He simultaneously studied painting with his father Juliusz.

Between 1871-1873, Wojciech studied at the School of Drawing and Painting - later the School of Fine Arts - under Władysław Łuszczkiewicz, followed by a stint until 1875, at the Munich Academy of Fine Arts, with professors Aleksander Strähuber and Alexander Wagner.

Wojciech Kossak's historical painting was different in style from that of his predecessor Jan Matejko. He belonged to a new generation of Polish battle-scene artists influenced by the work of his father Juliusz. However, like Matejko, he is known for depicting the history of Polish armed struggle and notable Polish battles of Central and Eastern Europe against foreign oppressors. Among his most famous paintings is The Racławice Panorama.