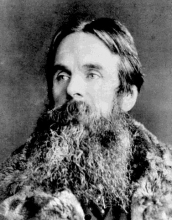 William Holman Hunt (2 April 1827 – 7 September 1910) was born in London. He was a clerk for several years, he left the world of trade to study at the British Museum and the National Gallery.
He formed the Pre-Raphaelite movement in 1848, after meeting the poet and artist Dante Gabriel Rossetti. Along with John Everett Millais they sought to revitalise art by emphasising the detailed observation of the natural world in a spirit of quasi-religious devotion to truth. This religious approach was influenced by the spiritual qualities of medieval art, in opposition to the alleged rationalism of the Renaissance embodied by Raphael.
more >
20