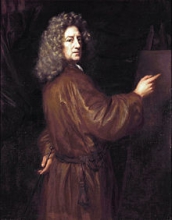 Nicolaes Maes (1634-1693) was one of Rembrandt's most gifted pupils. He was about fifteen when he moved from Dordrecht to Amsterdam to take up his apprenticeship with the great master.

Until around 1660, Maes tended to paint genre scenes in the same style as Rembrandt, with plenty of chiaroscuro and warm colours. Later, Maes switched to portraiture. And so he arrived by a circuitous route at his teacher’s specialty, Maes’s portraits were adapted to the fashion of the day: smoother and more detailed, with more colour and lighter. This proved a successful approach and Maes was soon much in demand, a prolific painter of Baroque state portraits.

Between 1653 and 1674, Maes was living in Dordrecht. He subsequently returned to Amsterdam, where he lived for another twenty years.