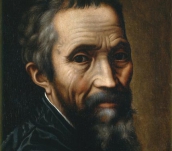 Painter, on panel and in fresco, sculptor and architect, writer of sonnets, Michelangelo Buonarroti was the first artist recognised by contemporaries as a genius. Hero of the High Renaissance. He was the only artist of whom it was claimed in his lifetime that he surpassed Antiquity.

He was born in Caprese in the 1470s and trained first as a painter with Ghirlandaio, and then as a sculptor under the patronage of Lorenzo de' Medici. In 1496, already known as sculptor, he went to Rome, where he carved the 'Pietà' for St Peter's.

Back in Florence in 1501 he began work on many sculptural and painterly projects most of which were left unfinished in 1505, when he was summoned to Rome to begin work on a sculpted tomb for Pope Julius II, a project that dogged him until 1545. From 1508 to 1512 he painted the vault of the Sistine Chapel with scenes from the Old Testament, from the Creation to the Story of Noah. Immediately celebrated, the Sistine Chapel ceiling, with its innumerable figures in complex, twisting poses and its exuberant use of colour, is the chief source of the Mannerist style.