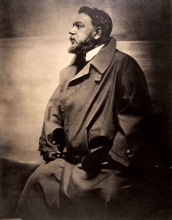 Joaquín Sorolla y Bastida (b. 1863, Valencia, Spain - d. 1923 Madrid) began to study painting at the age of fifteen in his native Valencia, Spain. At the age of eighteen, he went to Madrid, where he copied Old Master paintings in the Museo del Prado. Four years later, Sorolla won a grant to study painting in Rome; there he developed a distinct ability for depicting the effects of light.

When Sorolla returned to Madrid, his paintings were in great demand. The paintings he exhibited at the 1901 Exposition Universelle in Paris were very well received. Contributing to his international fame, the Hispanic Society of America commissioned him to paint decorative scenes for its library in New York City in 1911. J. Paul Getty purchased ten of Sorolla's Impressionist beach scenes at auction in 1933. He later explained, "One could hardly imagine greater contrasts than those between a Van Goyen and a Sorolla--but, as I say, I bought what I liked." Sorolla's widow left a large collection of his paintings to the people of Spain. The collection is now a museum, the Museo Sorolla, in the artist's house in Madrid.