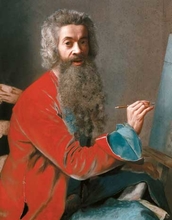 Jean-Etienne Liotard (1702-1789)
In his day, Jean-Étienne Liotard was considered one of Europe’s leading pastel painters. He trained as a miniaturist in his native Geneva and as a portraitist in Paris. From 1738 to 1742, he lived in Constantinople (Istanbul). Back in Europe, his portraits and Turkish scenes found a ready market among princes, aristocrats and prominent burghers. For over forty years, Liotard travelled round Europe from one patron to the next. He was greatly admired at the courts of Vienna, London, Paris and The Hague. Liotard was a favourite of Empress Maria Theresa of Austria, and of the French royal family in the reign of Louis XV. Later , he found his work had gone out of fashion and commissions became scarcer. It was then that he adopted a new genre: still lifes with fruit and flowers in pastel.
more >
8