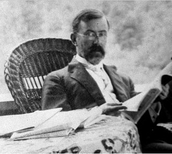 Charles Courtney Curran (1861–1942) was an American painter. He is best known for his canvases depicting women in various settings.

Charles Curran's work is represented in numerous museum collections, and his outdoor paintings of youthful women have remained popular with individual collectors. It has been estimated that he produced more than 1500 pictures during his career. Besides oil paintings, these include watercolors and numerous illustrations for magazines in both color and black and white.
more >
12