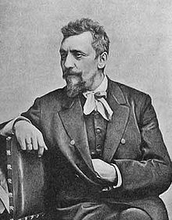 Carl Heinrich Bloch was a Danish painter.
He was born in Copenhagen, Denmark and studied with Wilhelm Marstrand at the Royal Danish Academy of Art there. He went to Italy to study art, passing through the Netherlands, where he became acquainted with the work of Rembrandt, which became a major influence on him. His first great success was the exhibition of his "Prometheus Unbound" in Copenhagen in 1865. After the death of Marstrand, he finished the decoration of the ceremonial hall at the University of Copenhagen.He was then commissioned to produce 23 paintings for the Chapel at Frederiksborg Palace. These were all scenes from the life of Christ which have become very popular as illustrations.
Carl Bloch died in 1890. His death came as "an abrupt blow for Nordic art" according to an article by Sophus Michaelis. Michaelis stated that "Denmark has lost the artist that indisputably was the greatest among the living." Kyhn stated in his eulogy at Carl Bloch's funeral that "Bloch stays and lives."
[Source]
more >
8