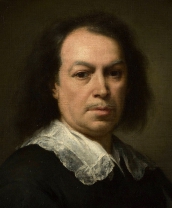 Murillo was the leading painter in Seville in the later 17th century. He remained one of the most admired and popular of all European artists in the 18th and early 19th centuries. His early works were much influenced by the early works of Velázquez, executed before Velázquez left Seville in 1623, and by the paintings of Zurbarán.

Murillo's first famous cycle of paintings was produced for the cloister of the convent of San Francisco in Seville (1645). There followed paintings for the cathedral (1658), and a celebrated series for the church of the Caridad (1667-70).

Visits to Madrid (one certainly in 1658) would have made Murillo familiar with works by Rubens and Van Dyck and contemporary Italian painters. His style became increasingly free in its handling, as is apparent in his many well-known representations of the Immaculate Conception.