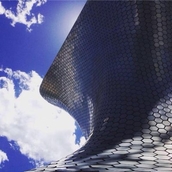 A part of the Fundación Carlos Slim, A.C., Museo Soumaya opened its doors to the public in 1994.

The museum’s holdings include a collection of European Old Masters, with some splendid works of the Italian, French, German, and Spanish schools from the fifteenth to the eighteenth century. There are also works from New Spain and South America in the collection, including paintings, sculptures, ivories, estofado carvings, and furniture from the viceregal period.

Museo Soumaya possesses the largest collection of works by Auguste Rodin outside of France. Also on display are emblematic works by the French impressionists and examples of nineteenth-century Mexican portraits and landscapes.

The Mexican and European avant-garde movements are represented by artists of the stature of Picasso, Dalí, Tamayo, Siqueiros, and Rivera. Two murals by Rufino Tamayo mark the beginning and end of a journey across six centuries of art, open to both the Mexican public and visitors from around the world.
more >
6