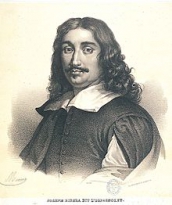 The "young Spaniard working in the manner of Caravaggio" was causing the Bolognese artists concern, Lodovico Carracci wrote admiringly of Jusepe de Ribera in 1618. Ribera (b. 1591, Játiva, Spain - d. 1652, Naples), second son of a Valencian shoemaker, had only been in Italy about four years and was already making a splash.

After working in Rome and Parma in 1616, Ribera settled in Naples, where he spent his career. Ribera's art combined knowledge of the Carracci and Caravaggio with Spanish realism and vigorous, scratchy brushwork. He practiced precise draftsmanship and used working-class models. His large output consisted mainly of religious works, including harrowing scenes of martyrdom that laid the foundation for the Neapolitan painting tradition one critic called "the poetry of the repulsive."

After 1632 Ribera's paintings became softer in tone and more classical in feeling. His palette lightened, perhaps through Venetian or Flemish influence, and he became primarily concerned with the expression of spirituality. Throughout the decade, he received major commissions from the Spanish king and the Neapolitan viceroys. By the 1640s Ribera was wealthy and operated a large workshop. His influence was extensive, inspiring artists such as Francisco de Zurbarán, Salvator Rosa, and Luca Giordano.