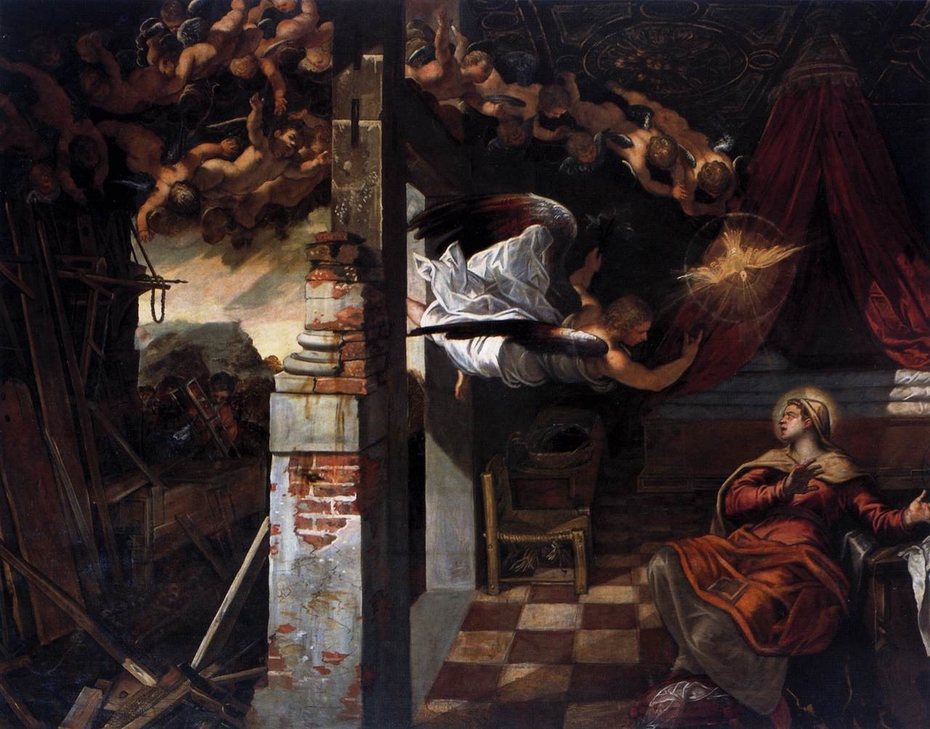 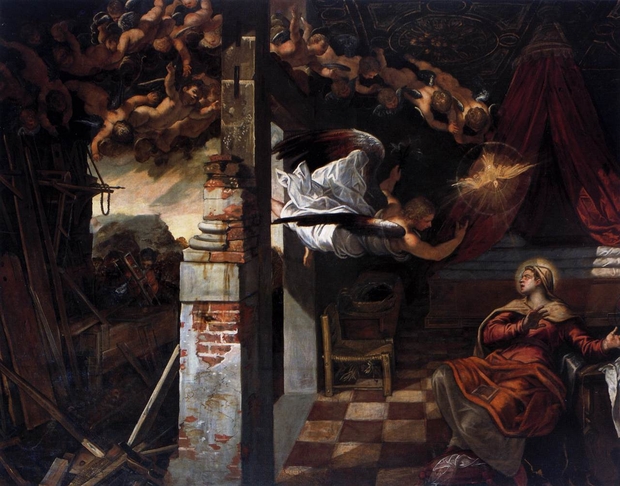 The painting is on the wall of the Sala Inferiore of the Scuola Grande di San Rocco. With its unusual perspective that places the viewer in mid-air, looking down into the house of Mary, this Annunciation is one of the most intimate works of the cycle in the room. Tintoretto multiples the perspective details, such as the straw-bottomed chair below the angel, which emphasizes the poverty of the Virgin.

Of the eight phases into which the Venetian Theatine monk Giovanni Marinoni (1490-1562) divided the story of the Annunciation, Tintoretto's painting shows the second, following the angel's greeting: "And when she saw him, she was troubled at his saying, and cast in her mind what manner of salutation this should be" (Luke 1:29). In late medieval painting north of the Alps, Mary's conception is often shown as a depiction of the infant Christ flying toward the Virgin on a divine ray of light, like a naked putto. As if to follow the path of the heavenly child's flight exactly, Tintoretto multiplies this motif into a whole phallic swarm of putti.

The announcement of the imminent divine maternity is given by the Angel to Mary in surroundings where everything is realistically described down to be the smallest detail: the dilapidated brick base and column; the two-coloured floor of large marble tiles; the straw-bottomed chair which clearly shows the passing of time; the work basket and its contents at the Virgin's feet; in the background the large bed covered by a canopy. No less realistic, even if in a theatrically scenographic sense, is the outside setting where Joseph is busy with his work surrounded by carpenter's tools hung outside the hut. Such objective description of the surroundings is contrasted with the visionary intensity of the miraculous apparition of the heavenly messenger and the joyful evangelical song, which break in from the left. They are preceded by the Holy Spirit in the form of a snow-white dove with unfolded wings, almost perpendicularly above the Virgin's head.

In some details the hand of Domenico Robusti, Tintoretto's son, has been correctly recognized.