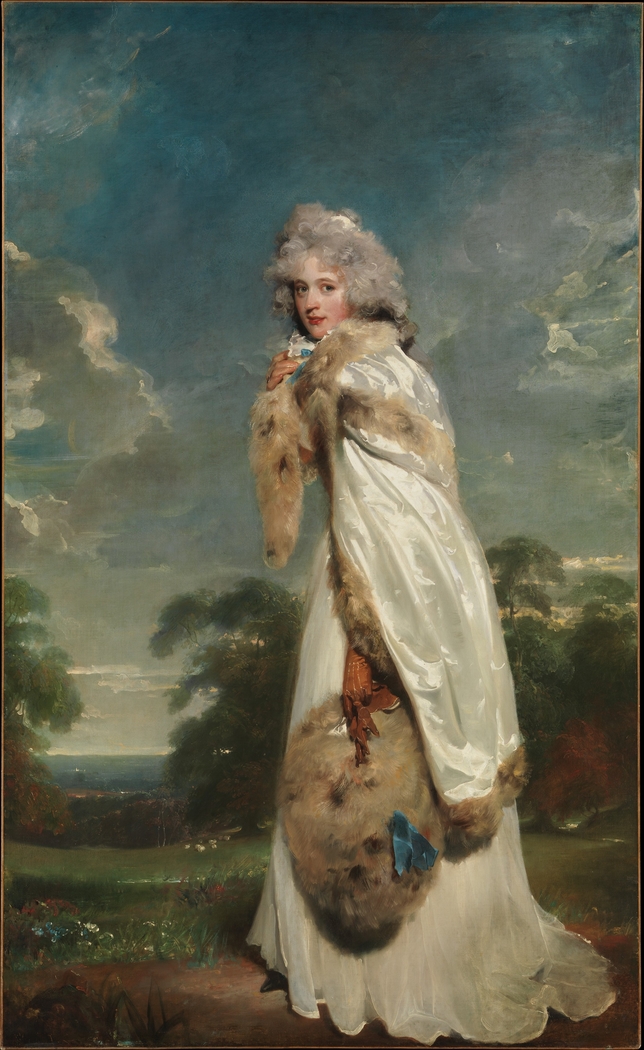 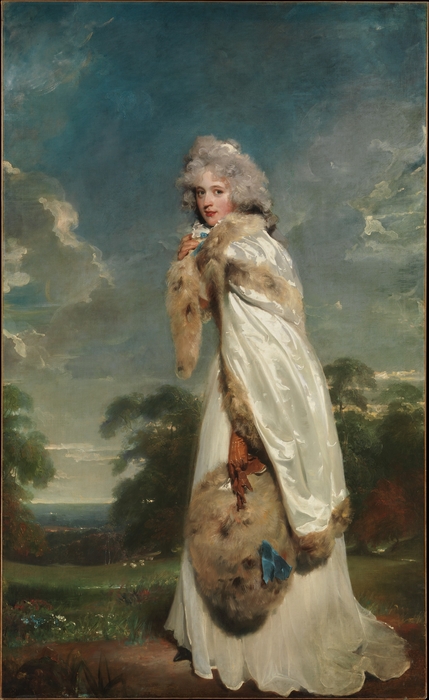 1790
The Irish actress Elizabeth Farren made her London debut in 1777 as Kate Hardcastle in Oliver Goldsmith's She Stoops to Conquer. She was at the height of her career when this canvas was exhibited in 1790. Seven years later, she married the twelfth earl of Derby. This elegant portrait helped to secure for Lawrence the role of successor to the elderly Sir Joshua Reynolds (1723–1792).

Elizabeth Farren's father, George Farran, trained as a surgeon-apothecary in Ireland, but left for England and a career in the theater. He married Margaret Wright, daughter of a Liverpool brewer, and when he died in 1770 left her with three young daughters. Elizabeth's birth date is uncertain (Baetjer 2009). She made a name for herself at the Theatre Royal in Liverpool and moved on to London in 1777, where from the first she was billed as Elizabeth Farren, rather than Farran, and was referred to as Eliza. She became a celebrated comic actress, performing on the London stage for the next twenty years. It cannot have been long before she met Edward Smith Stanley, twelfth Earl of Derby, whose wife had left him for the Duke of Dorset. (The Museum owns a portrait of her by Romney [49.7.57] and another of her with her husband and son by Angelika Kauffmann [59.189.2].) Miss Farren became the earl’s companion and joined polite society. The earl’s wife died on March 14, 1797 (they had never divorced), and on May 1 he and Elizabeth Farren married. The new countess gave birth to four children in the next four years. Three of them died young; the fourth, Mary Margaret, married the second Earl of Wilton.

This portrait was probably painted in the late winter and early spring of 1790 and was shown at the Royal Academy that year to great acclaim (Lawrence 1790) and some controversy. Lawrence had insulted Miss Farren by titling the work "Portrait of an Actress" rather than "Portrait of a Lady." The error may simply have been one of inexperience or oversight on the part of the twenty-one-year-old artist. There was also some dispute over the price of the work. The earl must always have intended to own the picture, but eventually had to pay one hundred guineas for it rather than the sixty guineas originally asked. Finally, Miss Farren wrote Lawrence to request that he alter her figure to make it appear a little straighter and more substantial. X-radiography (see fig. 1 above) and infrared reflectography show no evidence that Lawrence complied with this request. The application of the paint throughout is direct, with little reworking (the toe of the sitter’s black shoe was made smaller), though the artist may at first have conceived of including an architectural element of some kind in the background.
The picture has enjoyed enduring popularity, and was engraved by Bartolozzi in 1792 (The Met, 50.583.9).

License:
Courtesy of the Metropolitan Museum of Art
For more:
https://www.metmuseum.org/art/collection/search/436851