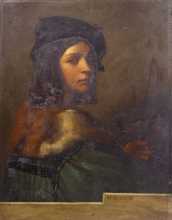 Venetian-born and trained, perhaps by Giorgione, Sebastiano (about 1485 - 1547) moved in 1511 to Rome, where he became a major portraitist and painter of religious subjects. He was a protégé of Michelangelo, who significantly influenced his art. His late style could be dark and sombre, and his figures have an almost clumsy force.

Sebastiano's early Venetian works resemble those by Giorgione. The Pope's banker, Agostino Chigi, one of the great patrons of the time, recognised his talent and brought him to Rome, where he also painted for patrons such as Pierfrancesco Borgherini.

It was in Rome that Sebastiano became one of the rare friends of Michelangelo, and was drawn into his rivalry with Raphael. This culminated in Michelangelo providing designs for Sebastiano's 'Raising of Lazarus', in an effort to outshine its direct competitor, Raphael's 'Transfiguration'.

After Raphael's death, Sebastiano was the foremost painter in Rome and the first artist to return there (from Venice in 1529) after the 1527 Sack of Rome. The Pope rewarded his service by making him Keeper of the Papal Seal (hence his name the Piombo).