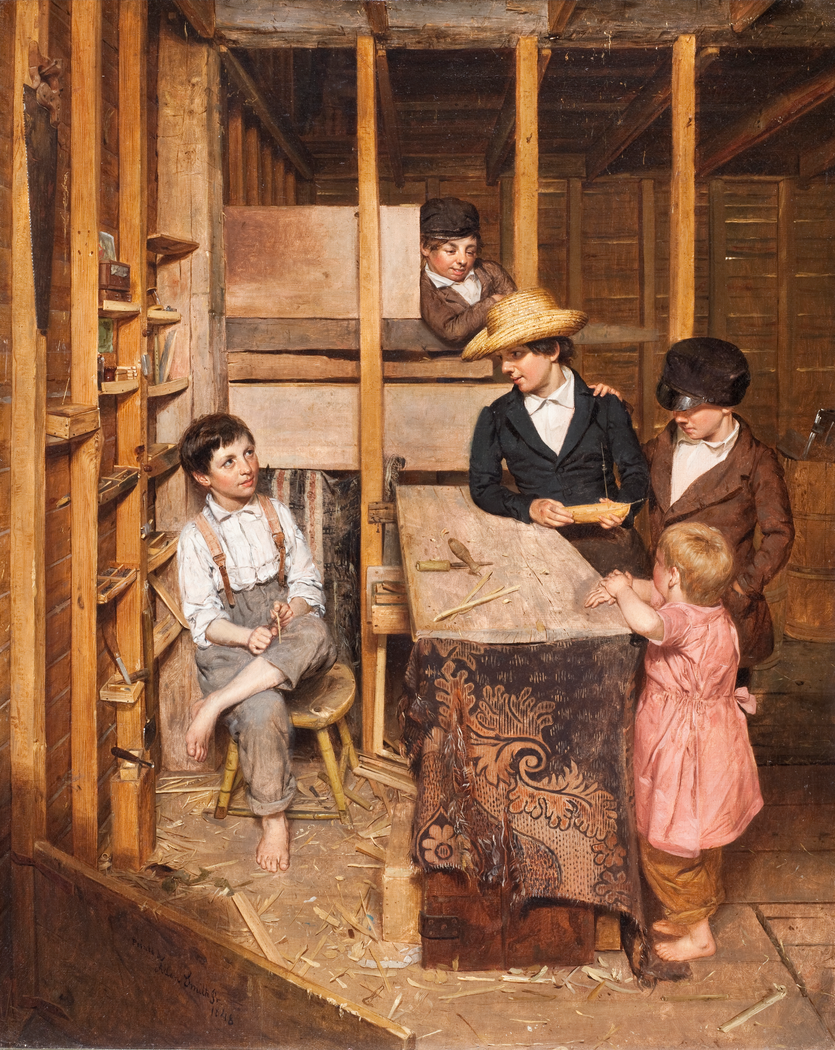 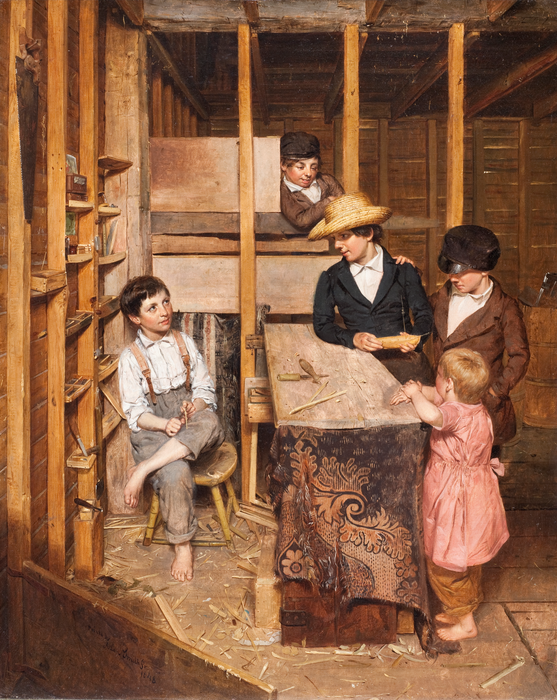 1848
Early in his career Smith exhibited landscape, still-life, and genre paintings in addition to portraits, but he met with such success as a portraitist after moving to the Midwest that he seldom painted any other subject. He appears to have received almost all of the most important portrait commissions in the Midwestern cities where he worked. Nevertheless, he exhibited genre paintings at the National Academy of Design in 1842 and with the American Art-Union in 1846 and 1848-49. The Young Mechanic, his Art-Union painting for 1848, is the first of these efforts to come to light. Its warm tonality, strong lighting, and detailed realism accord with the artist’s portrait style during the period. The thoroughgoing realism is epitomized in the trompe l’oeil feature of the gate that extends forward toward the picture plane and which bears Smith’s signature. His attention to detail and textures seems almost obsessive, even in the context of Midwestern taste as displayed in the realism of Cincinnati’s Lilly Martin Spencer (1822-1902) and JAMES H. BEARD early in the following decade. Smith’s is a frank realism of wear, stains, and clutter, held together by a strong architectural framework. The title, The Young Mechanic (the word mechanic meaning a skilled person who works with his hands), refers to the boy seated behind the counter of what may be his father’s woodworking shop. The working-class boy has been hired by the better-dressed boy in the straw hat to whittle a new mast for his toy boat. [source]

Notes from the Contributor:
Although Allen Smith Jr. was a well-known portrait painter in the Midwest, he trained and occasionally exhibited in New York City. He also created still lifes, landscapes, and genre scenes of everyday life, such as The Young Mechanic. (The term “mechanic” here refers to a skilled manual laborer.) The image of a craftsman was a popular theme in American figure painting throughout the nineteenth century. This scene is unusual, in that children rather than adults convey the narrative. They appear to be in negotiation, the well-dressed boy with a straw hat hiring the seated lad to whittle a new mast for his toy ship. The interplay between the two protagonists is highlighted by their different social classes. This picture was painted in Cleveland when economic and social conditions were changing in that city. As the local economy shifted away from manual skills, efforts to improve the life of laborers were initiated by the founding of a mechanics’ lyceum in the early 1840s. 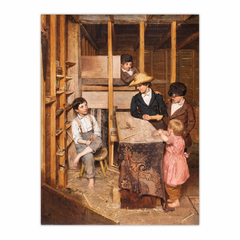