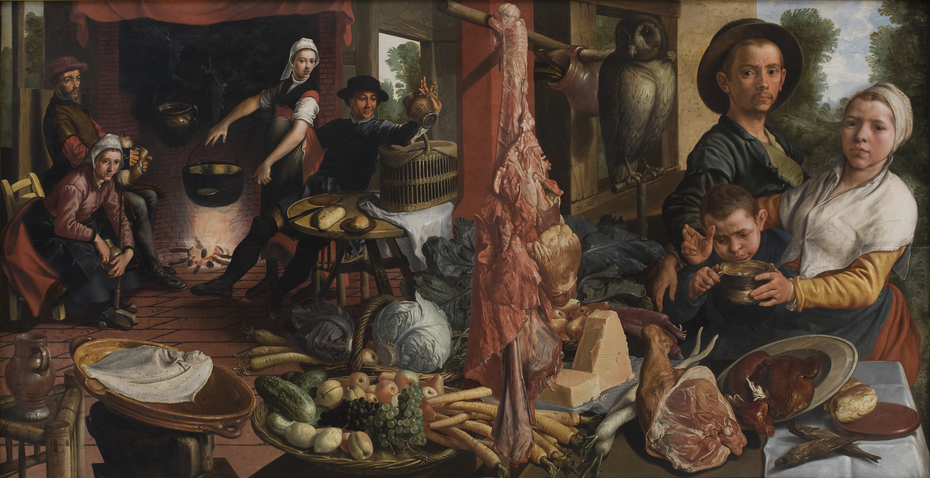 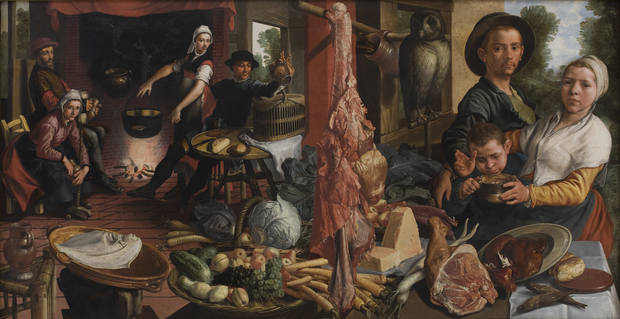 The Fat Kitchen. An Allegory.

1565 - 1575
The table is groaning under its load of meat, fish, bread, and fresh vegetables. To the right, behind the table, a peasant stands by his family, regarding us with an eloquent look. He pointedly turns his back to what goes on in the left half of the picture where we get a glimpse of a room with two couples, one young and the other old, gathered around the fireplace.

The young man is in high spirits, raising his jug of ale as he puts his arm around the girl. The old couple stare into space with a melancholy air, making them the key to understanding the picture: it is a warning against ”voluptas carnis”, i.e. a life in the throes of the senses, leading to gluttony, drunkenness, and moral looseness.

The still life genre
The still life genre was created by Pieter Aertsen in an Antwerp that was the leading commercial centre in Europe at the time. To Aertsen, the arrangements of food – the symbolism of which was explained in the figure scenes in the background – were a necessary alternative to religious painting. During the early years of his career he created a number of altarpieces that he, to his great wrath and sorrow, saw destroyed during the iconoclastic riots of the Reformation.﻿

License:
Courtesy of the National Gallery of Denmark
For more:
http://www.smk.dk/en/explore-the-art/highlights/pieter-aert…