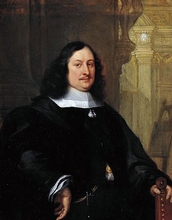 David Teniers the Younger or David Teniers II (15 December 1610 – 25 April 1690) was a Flemish Baroque painter, printmaker, draughtsman, miniaturist painter, staffage painter, copyist and art curator. He was an extremely versatile artist known for his prolific output. He was an innovator in a wide range of genres such as history painting, genre painting, landscape painting, portrait and still life. He is now best remembered as the leading Flemish genre painter of his day. Teniers is particularly known for developing the peasant genre, the tavern scene, pictures of collections and scenes with alchemists and physicians.

He was court painter and the curator of the collection of Archduke Leopold Wilhelm, the art loving Governor General of the Habsburg Netherlands. He created a printed catalogue of the collections of the Archduke. He was the founder of the Antwerp Academy, where young artists were trained to draw and sculpt in the hope of reviving Flemish art after its decline following the death of the leading Flemish artists Rubens and Anthony van Dyck in the early 1640s. He influenced the next generation of Northern genre painters as well as French Rococo painters such as Antoine Watteau.