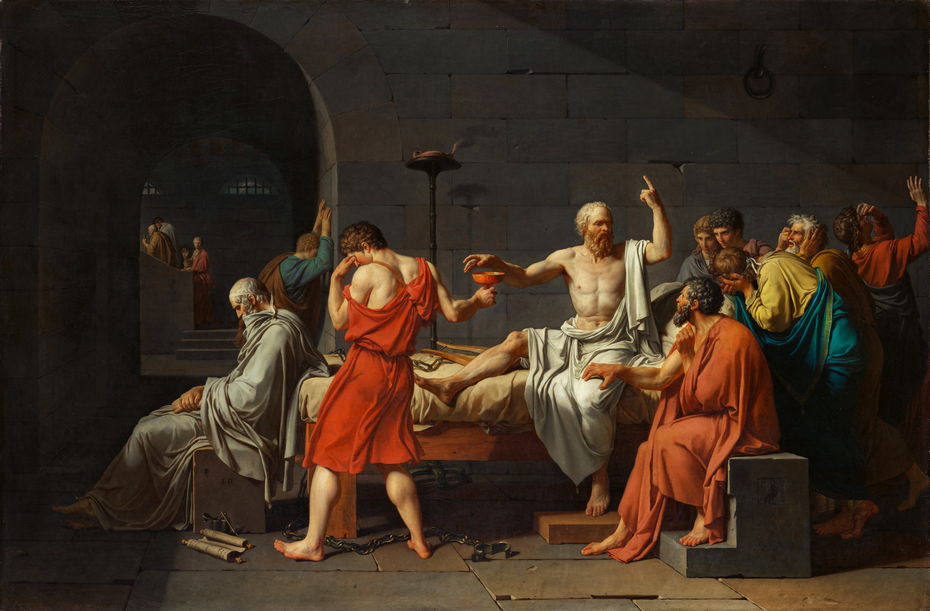 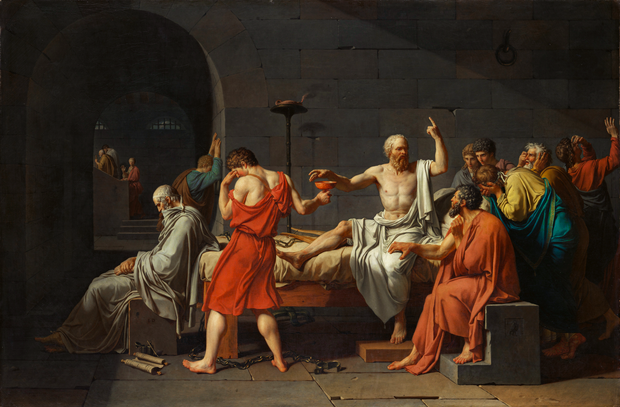 1787
Daniel Lehewych's description of the painting:

"The painting explicitly illustrates the scene in Plato’s Phaedo, following the Apology of Socrates, whereby he was sentenced to death by hemlock. It is an oil painting on canvas, which if one views in person, will notice the striking detail of the feet of the ancient Athenians, which are veiny, dirty and red, presumably from lack of footwear. Such redness is not apparent with characters who have footwear, such as Plato, who is sitting at the foot of Socrates, bowing in sorrow."

An important point of the historicity depicted in the artwork, as offered by Wikipedia:

"Although he consulted Father Adry, a scholar on the subject, David's depiction of Socrates death contains many historical inaccuracies. He removed many characters originally described in the dialogues of Plato. However, he included Apollodorus, the man leaning against the wall just within the arch, even though he is said to have been sent away by Socrates for displaying too much grief. David also historically misrepresented the ages of many of the pupils of Socrates, including Plato. Plato would have been a young man at the time of Socrates's death, but in this painting he is the old man sitting at the foot of the bed. Even the face of Socrates is much more idealized than the classical bust that is typically used as a reference portrait of Socrates. This underlines that Socrates life is projected out of Plato's mind, whereas the old Plato idealizes Socrates. Thus, the painting can rather be seen as an analysis than a failed historic depiction."

License:
This image may be subject to copyright.
For more:
https://en.wikipedia.org/wiki/The_Death_of_Socrates#