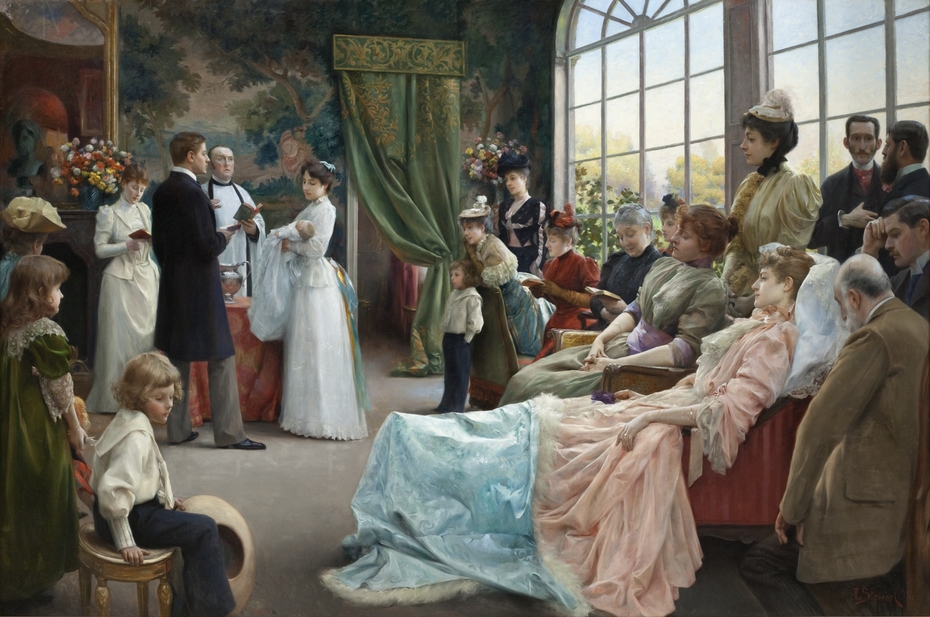 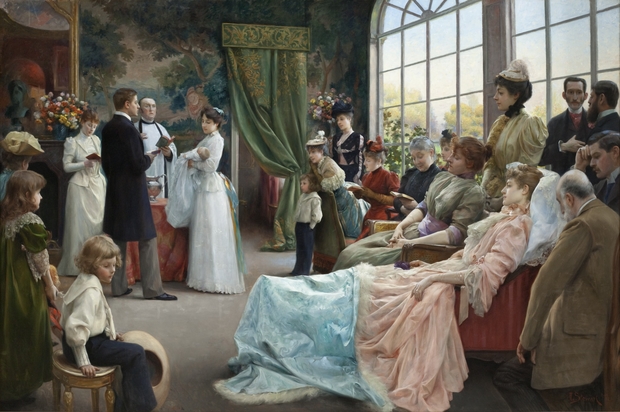 1892
Stewart’s paintings of the elegant and fashionable world in which he lived were sometimes inspired by specific events and often included his friends. In The Baptism he depicted with a studied realism an elaborate interior and the costume of members of high society gathered to witness the baptism of one of their own. The realistic details suggest that the figures were portraits of specific persons. In Stewart’s earlier painting The Hunt Ball, a key was provided to identify many of the figures. No key is known to exist for The Baptism. The painting has been traditionally considered to be of the Vanderbilts, but all attempts to substantiate this have proved fruitless. Although most of the male figures have distinctive physiognomies, Stewart’s social world was so large encompassing not only Americans but those of many nationalities-that identification is difficult. The art historian Sue Carson Joyner has suggested that the male standing on the far right is a self-portrait. Stewart usually idealized his female figures, giving them handsome, aristocratic profiles, so the similarities among female figures in his paintings can be misleading. The painting was probably not a specific commission, for Stewart was too wealthy to need such work, nor would he have offered it for sale if it were. The painting probably records the baptism of a friend’s child, indicated by the faint inscription of a day and time on the back of the painting, but was not intended to record the event for the public. The Baptism was the culmination of Stewart’s development of elaborate multifigured scenes; thereafter he limited his compositions to smaller groupings. Although the identities of the people remain an enigma, the painting can be appreciated on its own terms. It is a tour de force of technical skill and a prime example of late nineteenth-century academic aesthetics. The persuasiveness of Stewart’s depiction of natural light suggests the fascination with outdoor effects that were just emerging in his art. The picture met with great acclaim at an international exposition held in Berlin in 1895. The realistic illusion of the rich damask wall coverings, the silk, satin, and lace trim of the figures’ attire, and the soft, delicately rendered skin of the women and children captivate viewers even today. [source]