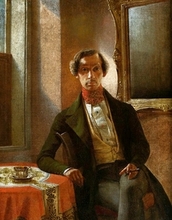 Zaleski was born in Kraków. He received his education in Kraków and Warsaw. In 1817−1822, Zaleski worked as a decorator in a Warsaw theatre while producing copies of paintings. In 1828 the artist exhibited his own work for the first time and received a scholarship to continue his education as a painter: he then continued to study painting in Germany, France and Italy. In 1846 the artist became a professor of perspective at the School of Fine Arts in Warsaw. Zaleski died in Warsaw in 1877.

Zaleski is particularly well known for works depicting city views and architecture of Warsaw, Kraków and Vilnius. His works can be found at the National Museum in Warsaw, Poland, the Turkey's Adam Mickiewicz Museum and the Gomel Palace, among other locations. Among Zaleski's works is a series of paintings on the November Uprising in Warsaw, to which he was an eyewitness.