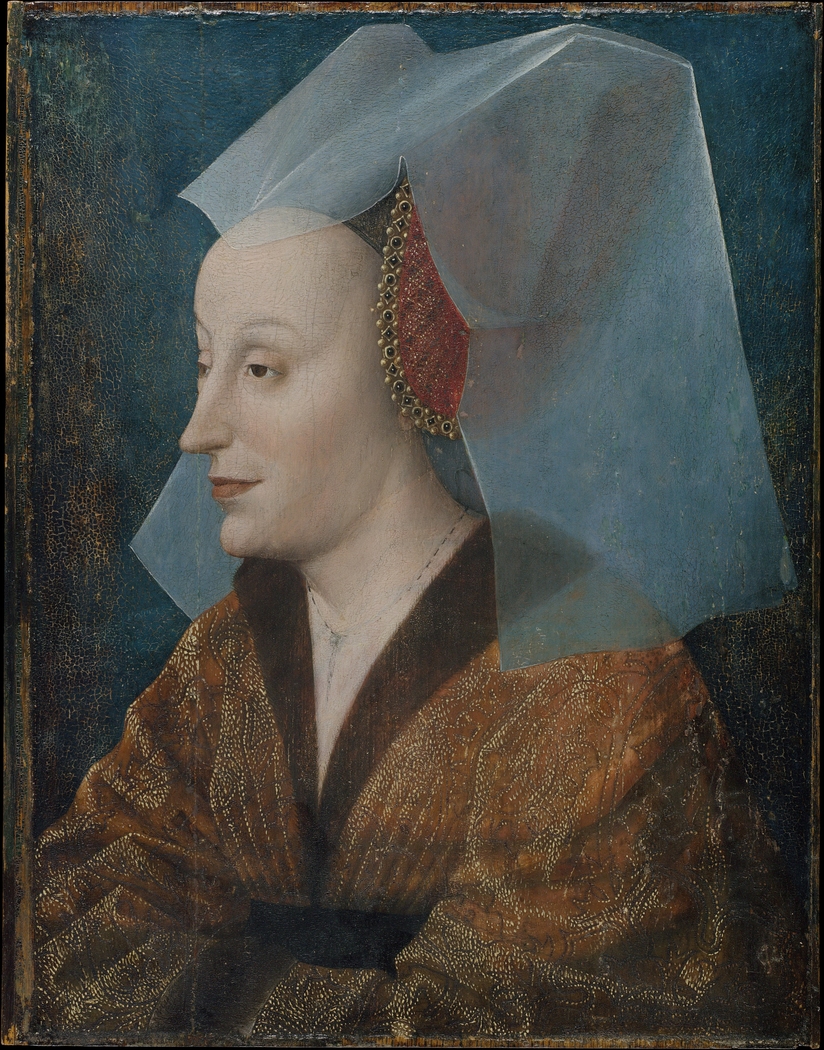 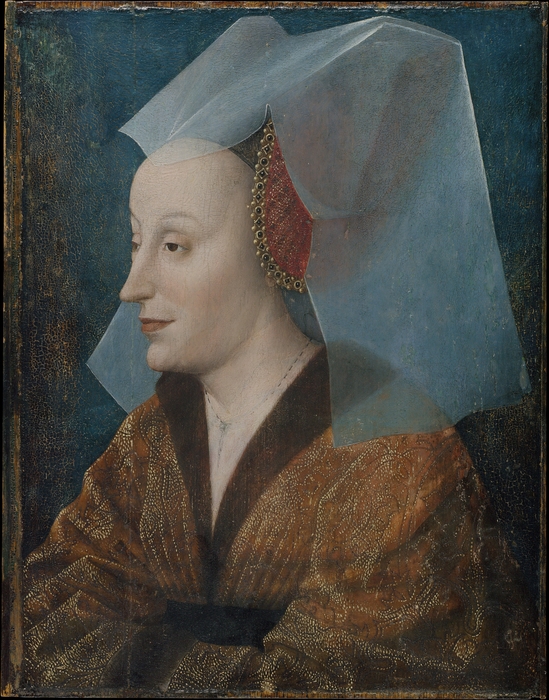 Portrait of a Noblewoman, Probably Isabella of Portugal (1397–1472)

The Portrait: The identities of the painter and sitter have long been debated, and while the painter remains uncertain, the noblewoman is now generally considered to be Isabella of Portugal (1397–1472), third wife of Philip the Good, Duke of Burgundy. As the daughter of King John I of Portugal, she was an attractive marriage candidate, but she was still unmarried at the age of thirty-one when she received an official offer in 1429 from Philip, who had sent a delegation of his ambassadors to Portugal (see Lemaire and Henry 1991, pp. 28–31). Among the party was Jan van Eyck, who was commissioned by the duke to paint the likeness of the Portuguese princess and send it back to Burgundy.[1] Unfortunately, only a seventeenth-century drawing survives (see fig. 1 above). In this copy, Isabella wears a dress with a v-shaped neckline, cinched at the waist, and a transparent inset beneath her bodice. This overall appearance is repeated in other portraits of the duchess, including The Met's painting. Most examples also show the divided hennin commonly worn at the Burgundian court. More than ten versions of portraits of Isabella are known, dispersed over different time periods. Two of them are dated relatively securely to her lifetime: the lost Van Eyck portrait, and a painting by the workshop of Rogier van der Weyden, now in the J. Paul Getty Museum, Los Angeles (fig. 2). The Met’s portrait is closely related to the latter work. Two other paintings are most likely later copies after The Met's panel: one is in the Musée Hospice Comtesse, Lille; the other was auctioned at Christie’s, London, in 2004.

Based on an inscription on what he describes as the original frame (see Notes), Herman Nasse (1911) identified the noblewoman as Michelle de France, Philip’s first wife. In a letter to Duveen, Max J. Friedländer (1927) rightfully questioned the basis for this identification, since no one other than Nasse had seen the "original" frame, and the known appearance of Michelle de France does not fit with that of the unknown noblewoman. Instead, Friedländer dated the portrait to 1420 and proposed Margaret of Bavaria, wife of John the Fearless and mother of Philip the Good, as the sitter, based on a later version in Semur-en-Auxois that bears this inscription. This is in contrast to his article from about thirty years earlier (see Friedländer 1900), in which he called The Met's painting an insignificant copy from the end of the fifteenth century. Paul Wescher (1941) was the first to identify the noblewoman as Isabella of Portugal, because of the portrait’s resemblance to the Getty painting. That portrait is usually dated about 1450, which would place it in Isabella’s lifetime. It may in fact have been the same portrait that was described in one of the inventories of Margaret of Austria, great-granddaughter of Isabella, since the clothing of the Getty portrait matches the description.[2] In her première chambre Margaret had thirty-one portraits of members of the House of Habsburg, the House of Burgundy, as well as members of the Spanish and English royal families.[3] A number of these portraits, including those of Philip and Isabella, were circulated widely and copied into the sixteenth century. Read more...

License:
Courtesy of the Metropolitan Museum of Art
For more:
https://www.metmuseum.org/art/collection/search/437203