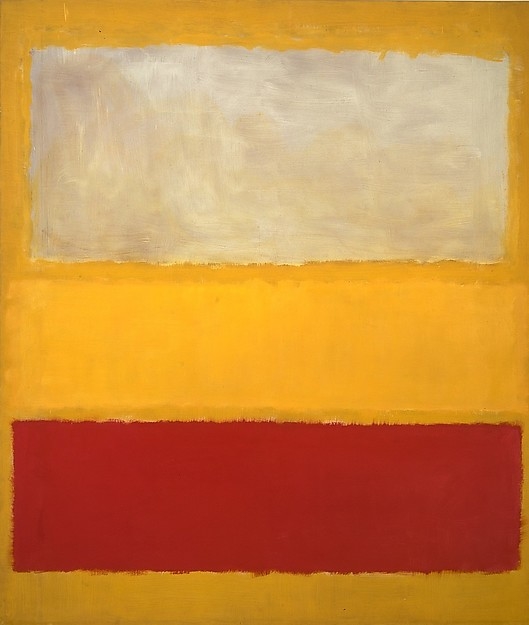 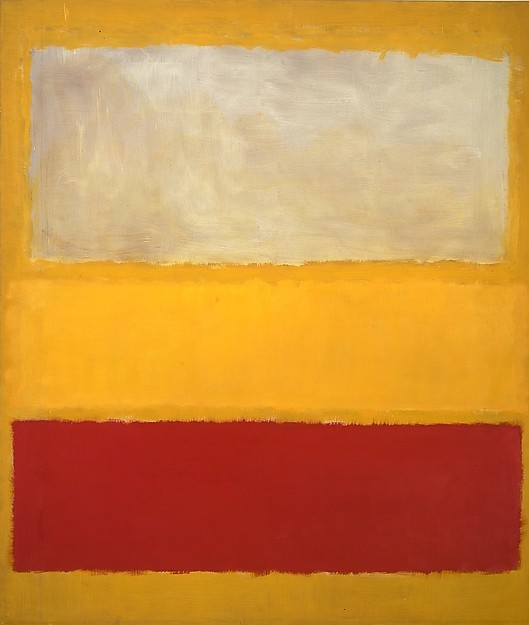 1958
Abstract Expressionism, the style of painting that achieved prominence in the 1950s, encompasses two very different sensibilities. One, exemplified by the work of Jackson Pollock and Willem de Kooning, is characterized by energetic brushwork and rhythmic, dynamic compositions; the other, contemplative in tone and made up of subtle color harmonies, relatively static compositions, and simple forms, is embodied by the paintings of Mark Rothko.

By 1950 Rothko developed the compositional format that he was to use, with refinements and variations, for the rest of his life. In these completely abstract works, color and shape replace traditional narrative content and figurative imagery. Two or three horizontal bars of varying size and color dominate the large, primarily vertical canvases, and they appear to hover on the picture surface. This effect is produced in part by the "halo" created around the horizontal bands as they overlap the background color. It is also enhanced by the translucency of the paint, which was so diluted that it actually saturated and stained the fibers of the canvas. Although Rothko minimized the tactile nature of the medium, these paintings still retain a painterly quality in their subtle brushwork and in the ragged edges of the forms.

In Rothko's oeuvre color varies greatly, and it evokes a full range of emotions. The primary hues of red and yellow that make up "No. 13 (White, Red on Yellow)" are bright and joyous, while other works are composed of dark, brooding maroons, blues, and greens. In the two years before his suicide in 1970, the artist produced a large series of dark paintings, the majority of which were executed on paper with acrylics. Made up of opaque, monochromatic grays, browns, and blacks, these works are generally simpler in structure and eliminated the floating effect that previously enlivened paintings like "No. 13 (White, Red on Yellow)." (Source: The Metropolitan Museum of Art)