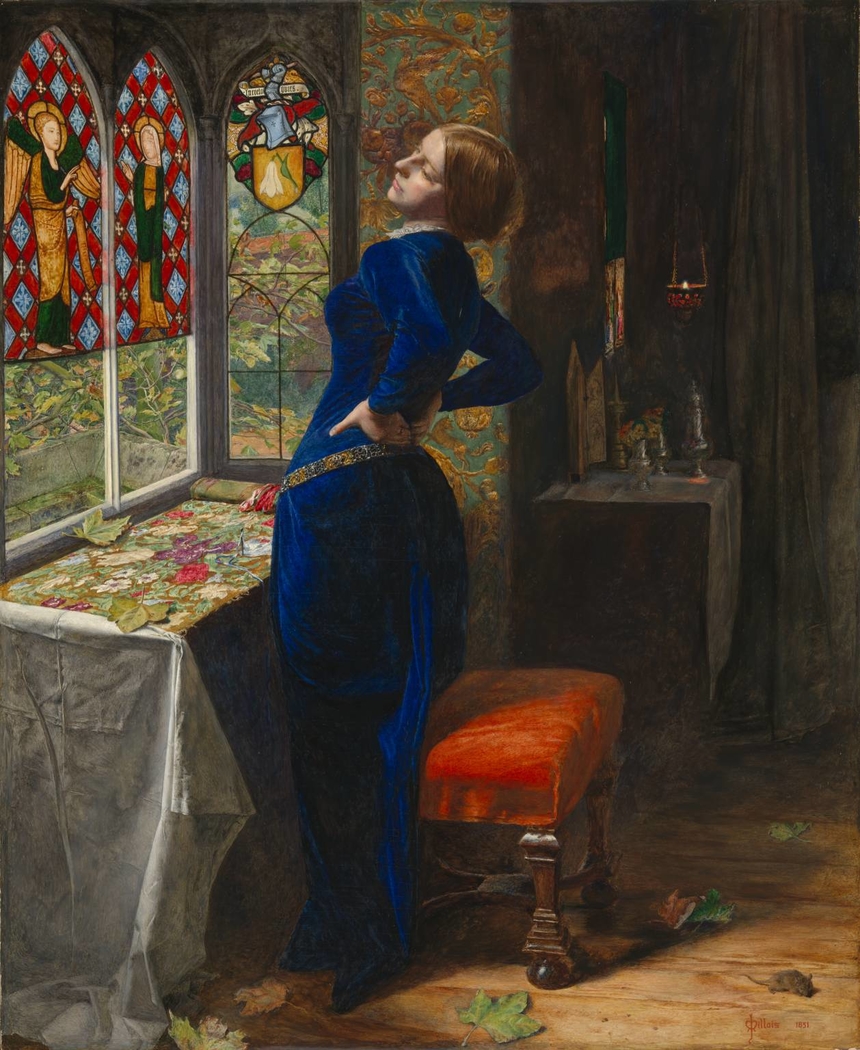 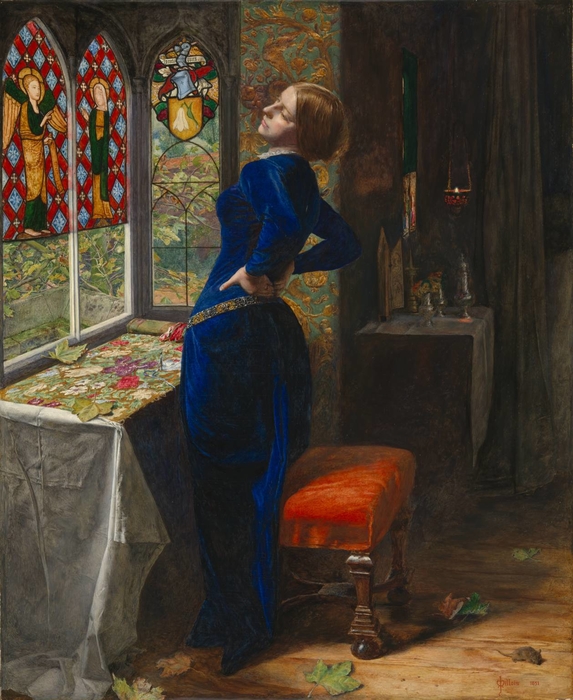 1851
When it was first exhibited at the Royal Academy in 1851 this picture was accompanied by the following lines from Tennyson's Mariana (1830):

She only said, 'My life is dreary,
He cometh not,' she said;
She said, 'I am aweary, aweary,
I would that I were dead!'

Tennyson's poem was inspired by the character of Mariana in Shakespeare's Measure for Measure. Rejected by her fiancé, Angelo, after her dowry was lost in a shipwreck, she leads a lonely existence in a moated grange. She is still in love with Angelo - now Deputy to the Duke of Vienna - and longs to be reunited with him.

In the picture the autumn leaves scattered on the ground mark the passage of time. Mariana has been working at some embroidery and pauses to stretch her back. Her longing for Angelo is suggested by her pose and the needle thrust fiercely into her embroidery. The stained-glass windows in front of her show the Annunciation, contrasting the Virgin's fulfilment with Mariana's frustration and longing. Millais copied the scene from the window of the Chapel of Merton College, Oxford. However, the heraldic design appears to have been his own invention. The motto 'In coelo quies' means 'In Heaven there is rest' and clearly refers to Mariana's desire to be dead. The snowdrop symbolises 'consolation' and is also the birthday flower for 20 January, St Agnes' Eve, when young girls put herbs in their shoes and pray to St Agnes to send them a vision of their future husband. It may also refer indirectly to John Keats's narrative poem The Eve of St Agnes, which, like Tennyson's Mariana, is also concerned with the theme of yearning. The mouse in the right foreground is Tennyson's mouse that 'Behind the mouldering wainscot shriek'd, | Or from the crevice peer'd about'. The miniature altar in the background, decorated with a small triptych, and a silver casket, may refer to Tennyson's other poem on the same theme, Mariana in the South, in which Mariana prays desperately to the Virgin Mary.

Millais may have intended the picture to complement Holman Hunt's Claudio and Isabella (1850, Tate N03447), a scene also taken from Measure for Measure. But as a subject from Tennyson the picture acquired a certain topicality, since Tennyson was made Poet Laureate in November 1850.