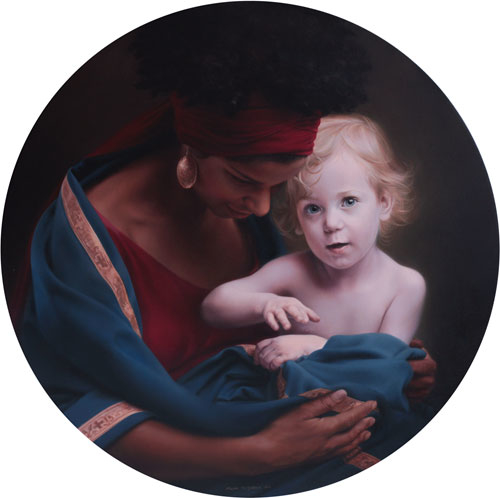 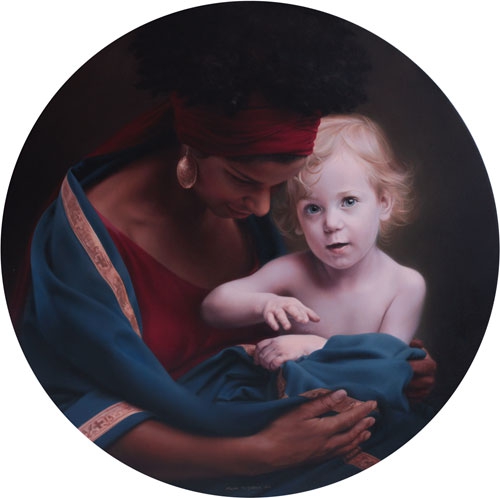 2011
Oil on canvas, 100cm diameter
Private collection
I admire the gothic and renaissance paintings of Madonna and little Christ. The artists used to paint the portraits of attractive, young ladies together with their beautiful children. Obviously, Mother of Christ is a girl from a neighborhood - an Italian, a German or a Dutch - whose appearance much differs from that of Middle Eastern Maria. In other words, Madonna and Christ are from here. Believing in them we believe in our nation, country, social system and finally in ourselves – here and now.

Outside of the church buildings and sacral literature, religion has more realistic face. Individual beliefs, as well as intellectual and ethic principles are being shaped under the current circumstance, influenced by certain interest. Otherwise, the history of mankind would not have been the same. Conquerors armed with guns and tops accompanied with slave traders would not have followed the explorers and missionaries during the age of discovery of the New World.

I would say that predominant religion in the contemporary world could be the amount of widely acclaimed principles and beliefs being conveyed through educational systems or mass media. Tolerance, multiculturalism, human rights, freedom of speech, universal love – are some of them. Obviously, all those that the majority could hardly believe in. Perhaps because those sound unbelievable.

License:
All rights reserved. Exhibited on USEUM with the permission of the rights owner.
For more:
http://www.hrnjazovic-milan.com/mother&child.html