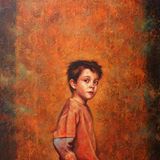 Born in 1967 in Dhuvjan, from Greek parents.
He paints from the age of five years old.
At the age of 14 years old, ending eight-year primary school, and after double competition (in Gjirokaster, Berat,) wins a place in the Artistic Lyceu "Ajet Xhindole" in Berat.
After a four-year studyng, ending in 1985 with excellent the school.
His first teacher was the eminent painter Sotir Capo «Artist I MERITUAR».
In 1990 he graduated from the Pedagogical Institute of Gjirokastra «Eqerem Çabej».
For a short time working as an educator, having undertaken to teach the first grade in an elementary school of his region. (Here is a first cause for the issues that will inspire along the way.)
In 1991 with the great change in Eastern Europe, opening the frontiers, he moves to Greece, settled in Athens, where he lives until now.
Then begins his career as a painter.
In this year, making his first solo exhibition in the "Cultural Center" of the City of New Psychico.
In the meantime enroll in a school of art, the Municipality of Piraeus, a four-year period, taught painting, church painting and history of art, from renowned teachers such as Manos Stefanidis, Kostas Markopoulos and John Karouzos.
For a period of six years, makes many solo exhibitions in various locations in Athens, mainly in Churches and Spiritual Centers of Municipalities.
In 1997 started cooperation with «Gallery Tzimas» in Kifissia (key importance for the course of the artist.)
In this art world, the young painter comes into contact with the greater works of Greek artists, and masterpieces of Russian art, influence it deeply, as the works Poltavec, Sigajefsi, Zurakovski, Berbeniets, Golibjevskaja, Brataniuk, Vladimir Litvinenko, ... . The specific gallery was one of the first, which was opened this road.
Main partner of the gallery takes part in all the artistic events until now, mainly in the annual of the “Group exhibition”, for 14 continuously years.
He is the curators of the publishing catalog by the gallery each year.
At the 2005 performs solo exhibition in «Gallery Tzimas» with 70 works, paintings of the previous five years.
In 2006 made two solo exhibitions in Athens.
One in the "Gallery Psychari" the exhibition catalog foreword by renowned artist Vangelis Tzermias, who writes..

The soul of a model is the light witch a painter would want to attribute in to his white canvas. It is not always contrivance.
Odysseas Oikonomou manage to find his Ithaki, he is being consumed into his model’s nature as if he would wanted to have a dreamy, but everlasting, relationship with them ,as we meet in every sincere painter with any possibility he possess in the brush and the color. And at the end he always has results.
Vaggelis Tzermias
Painter
September 2006

And the second exhibition made to «Gallery Argo» in Kolonaki, the exhibition is prefaced by an art critic Athena Schina.


Painting requires synchronous dedication and freedom as to the transformative possibilities it offers.
Odysseas Οικonomou, an artist of the younger generation, has both of these parameters.
Inspired by the environment in which he lives and that he dreaming, at this moment interested in an appointment with past and present, through youth and an (without age) spring.
His compositions moving in the climate of newromantism with several symbolistic resonances. Children, young girls and teenagers, removing the suspicions of wear and time, gazing glare and diffusion of sunlight, next to ancient ruins in the corners of the city, in the glades, as the vegetation embraces perpetuating the stigmiotypikes versions and especially the strangeness of their occurrence through a series of contrasts.
Living together of contradictions between the moment and duration, and the dreamy element in everyday life, pushes Odysseas Oikonomou to makes use of modern techniques of painting, which exploits with skill and imagination, knowing to handle design his compositions, and Tempered harmonies of colors, through which affords a individual style a higher profile, tunneled into a elegiac atmosphere.
Athena Schina
A critic and art historian

In 2007 he became a member of the Artistic Chamber of Greece.
In 2008 shall take part in nationwide painting exhibition "ACTION FIGURE SPACE"
Organized by the Chamber of Visual Arts in "Technopolis" of the City of Athens.
His work «moment», selected as representative of the exposure to the newspaper "Eleftherotypia" among 750 artists.
In 2010 in the same place again, takes place a nationwide painting exhibition titled "Human Form in Art" which shall take place successful.
In 2008 collaborates with the «Gallery Adam» in Kolonaki and for four years.
That same year started a successful cooperation with «Minima Gallery» in Mykonos.
The "Gallery Lefakis" has successfully auctioning at "Athens Hilton" quite works.
Has interested in his works the auction house «Sotheby's» where he became a first contact with the artist at its office in Greece.
Favorite great painters of artist are, El Greco, Rembrandt, Van Gogh, Monet, William-Adolphe Bouguereau, Alexei Alexeivich Harlamoff ...
From the Greeks painters are, Nikolaos Gyzis, Nikolaos Lytras, Georgios Jakobides, Agelos, George Rorris, Vaggelis Rinas ...
Artist's favorite colors are those that are based on walnut oil.
Favorite subject, the portrait of people and especially children’s.
He started painting figures, mostly female figures for a decade.
Children's portraits initially started studying the famous Greek painter Nikolaos Gyzis.
His studies that made in children's portraits of Gyzis, were countless, persistent, with love and admiration.
For all this time got many orders portraiture executed for clients who were mostly children's portraits.
The success of these portraits pushed him slowly in child portraiture.
He has a passion for artistic photography and the aesthetic beauty of the things.
In 2003, meet Maria a great talented photographer who studied in England on the subject of the portrait.
The exchange of views (experiences) and cooperation with her was precious (valuable aspects).
From here arises the main muse of his, in most paintings, Thalia.
She is niece of Marias and the perfect model for the artist.
In idyllically, dreamlike landscapes of Corfu, characteristic streets, in ancient sites and ruins, in losing royal splendors.
In characteristic Roman wells and fountains, in the famous 'Achillion “.
Posing with grace the gorgeous Thalia . Its natural beauty and preoccupation of her with ballet facilitate things, always by calculating on the talent of Marias, in creating poses of models, lighting, communication with children and selection of an appropriate point at the appropriate time of day, in the city.,
Anastasia, five years old, Maria’s neighbor, is another little sweet creature, that artist’s used for his model in several paintings.
Iris, primary school girl, daughter of a good friend of his, who is himself a sculptor and painter, is another cute kid posing for the artist.
The inspiration, the stimulus for the artist, can result from various sources for example a move film as was the amazing movie about J. Vermeer, « Girl with a Pearl Earring”
Or, from the work of another artist such is the famous photographer D.Hamilton etc..
The last years his work manages an acclaimed manger of art, who has undertaken to promote his works in U.S market. His works are now in several galleries in USA.
more >
47