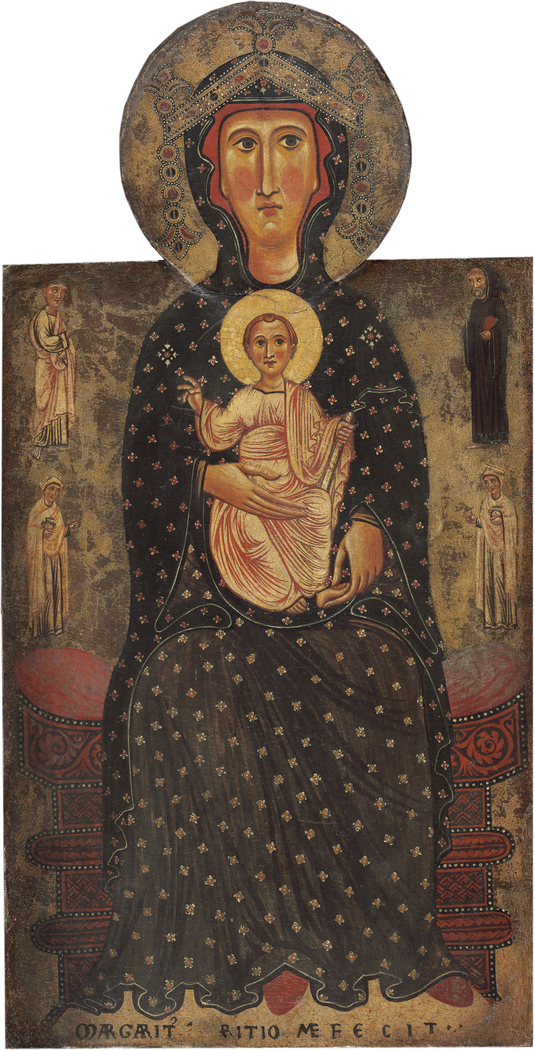 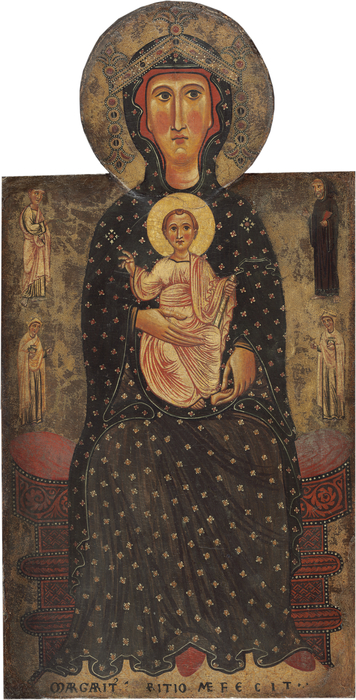 1240 - 1245
Margaritone d'Arezzo (Italian, active second and third quarter 13th century) was the first artist from Arezzo whose name we know and whose work survives. He was active during the middle decades of the 13th century. About 300 years later, Giorgio Vasari (Florentine, 1511 - 1574), who published biographies of Italian artists in 1550 and 1568 (and who was himself an artist from the Tuscan town of Arezzo), all but credited Margaritone with the invention of panel painting in Italy. While this is an exaggeration, it is true that panel painting had not been common earlier: churches were decorated with fresco and mosaic, and wealthy patrons preferred the luxury of manuscript illumination or precious metals. One factor that contributed to the increased popularity of panel paintings was an influx of icons following the Fourth Crusade. When Western Crusaders turned on their Byzantine allies and sacked Constantinople in 1204, thousands of icons and relics were taken to the West. It is not surprising, then, that this early Tuscan painting shares many features with Byzantine art.

The Virgin and Child here are strictly frontal, remote, and hieratic. They are depicted using a limited range of color and outlined by heavy contour lines. Jesus looks more like a miniature adult than an infant. The gold striations of his robe also come from Byzantine convention, and Mary’s triangular crown, with long bejeweled dangles at the sides, is an Eastern form. The very composition of Margaritone’s painting is based on an icon type: the Virgin Nikopoios, or Victory Maker. The original icon was believed to confer victory on Byzantine armies and to repel invading barbarians. It did not repel the Crusaders, however, who transported the icon to the Basilica of San Marco in Venice.

License:
Courtesy of the National Gallery of Art, Washington
For more:
https://www.nga.gov/collection/art-object-page.41622.html