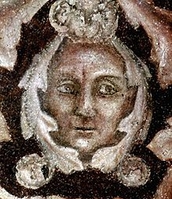 Know as “the great Giotto”, Giotto di Bondone was the leading artist at the start of Italy’s Renaissance and the Florentine School of painting. According to Giorgio Vasari (1511 – 1574), who dedicated a chapter to the painter in his The Lives of the Artists, Giotto was the tipping point of Italian art from the Byzantine style, into the Renaissance. It is said that that last great painter of the Byzantine era, Cimabue (1240 – 1302), discovered a young Giotto in his rawest form.

His earliest individual works include a fresco of the Annunciation and his quite large Crucifix, painted for the Santa Maria Novella in Florence. Giotto also painted in Rome from 1297 – 1300 and created his Badia Polyptych for the high altar of the Badia in Florence, which now hangs in the Uffizi Gallery.

Giotto’s masterpiece is often considered the fresco cycles he painted for the Scrovegni Chapel or Arena Chapel in Padua, with depictions of salvation seen in the Life of Christ and the Life of the Virgin and also a Last Judgment piece. The combined works, completed in the course of up to 7 years, have become known as a defining early masterwork of the Renaissance, going on to influence many artists in Florence and beyond.

Giotto painted other works in Padua, as well as in Assisi, and traveled back and forth between Rome and Florence. These made up most of his later works, including his Madonna altarpiece in the Church of Ognissanti in Florence, from around 1310. The piece, now in the Uffizi Gallery, finds its display in comparison to Cimabue’s Santa Trinita Madonna and Duccio’s (1255 – 1260) famous masterpiece, the Rucellai Madonna. Receiving a great number of religious commissions in Rome, Giotto also traveled to work in Bologna and Milan. The artist was also an accomplished architect, appointed to work on the Basilica di Santa Maria del Fiore, (The Duomo of Florence).