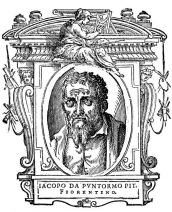 Jacopo Carucci (b. 1494, Pontormo, Italy - d. 1557 Florence), called Pontormo after the Tuscan town from which he came, was one of the leaders of the Mannerist movement.

A painter's son, the young Jacopo was immersed in High Renaissance values as apprentice to Leonardo da Vinci and others in Florence. The agitated emotionalism of his altarpiece in the church of San Michele Visdomini in 1518, however, signaled a dramatic departure from his masters' balance and tranquility. Hallmarks of his mature Mannerist style were already present: psychic energy over physicality, beautiful linear rhythms, restless movement, ambiguous space, vivid colors. For Pontormo, the work of art was ornament.

Unlike most of his Florentine contemporaries, Pontormo also studied northern European artists, particularly Albrecht Dürer. Under the profound influence of his friend Michelangelo, Pontormo, primarily a religious painter, developed more sculptural form and disciplined his emotionalism, retaining poignance. During his last ten years, he became increasingly reclusive and disturbed, shunning even Agnolo Bronzino, who had been like an adopted son to him.