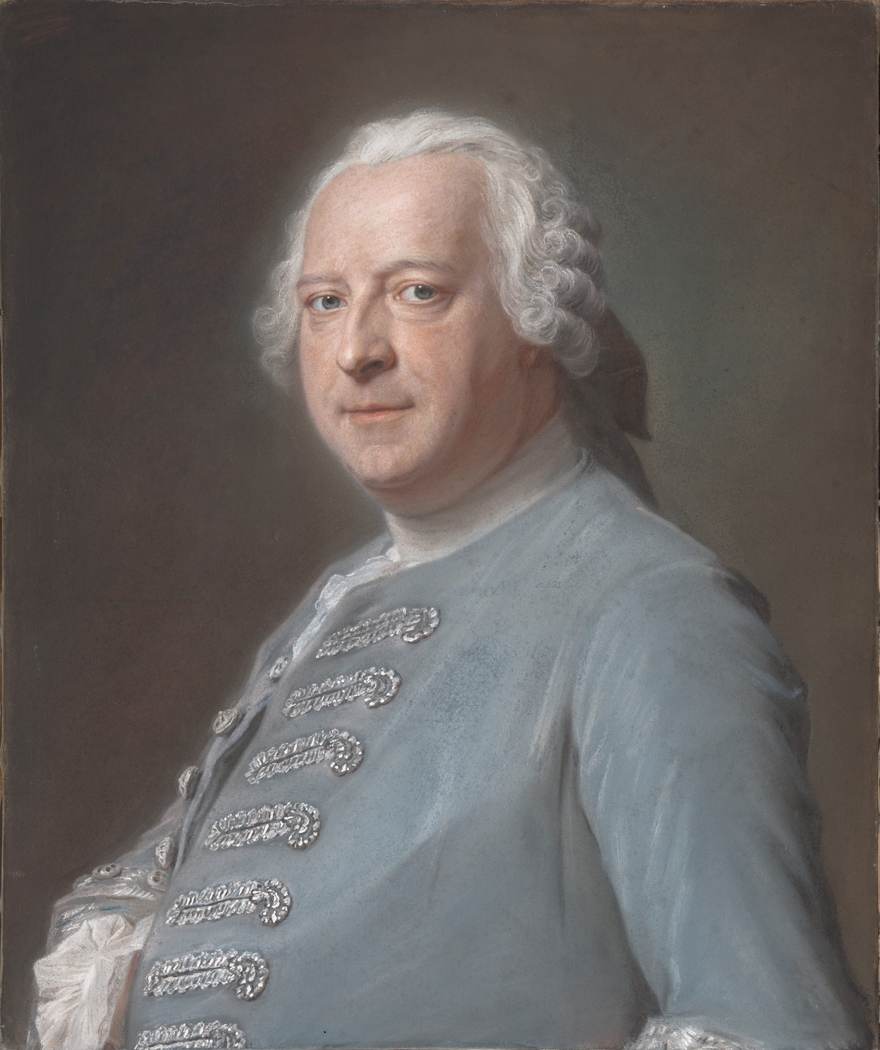 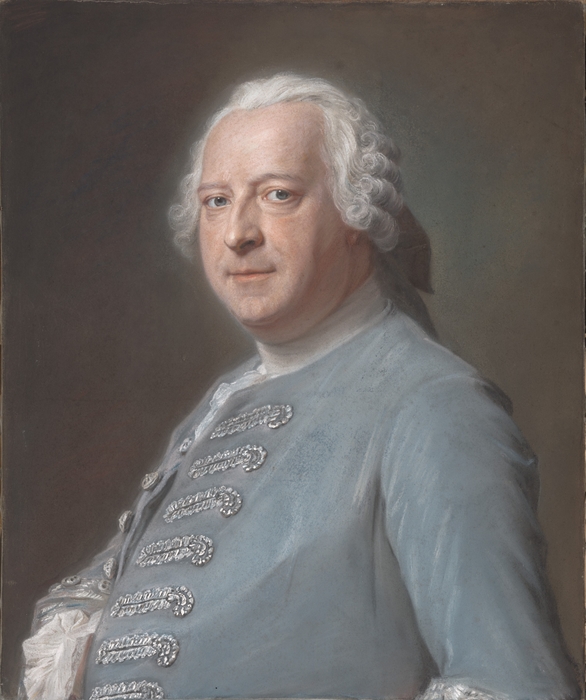 1750
Garnier d’Isle (1697–1755) was an architect and a garden designer whose rise to influence coincided with the ascendency of Madame de Pompadour as Louis XV’s mistress, and he is associated with the remodeling of several of her properties, including Bellevue. In 1748 he became the comptroller of the Luxembourg and Tuileries palaces. He commissioned from La Tour a portrait that was exhibited at the 1751 Salon. Two other portraits of Garnier d’Isle by La Tour survive: one, the same size as this work, shows him in a gray moiré silk coat (Fogg Art Museum, Cambridge, Mass.), and the other is a smaller head-and-shoulders view in which he also wears gray (Musée Antoine Lécuyer, Saint-Quentin). Here the artist’s impeccable handling of costume details pales by comparison with the fleeting and perhaps self-satisfied smile of the sitter.

A native of Saint-Quentin, in northern France, this gifted pastellist (for Maurice Quentin de La Tour was exclusively a pastellist) arrived in Paris in 1719 to apprentice with a now little-known painter, Claude Dupouch (d. 1747). He was thus fortunate to see at an early age the work of the famous Venetian pastellist Rosalba Carriera (1675–1757), who made a much-heralded visit to the French capital in 1720–21. La Tour settled permanently in Paris in 1727. Ten years later he became a candidate member of the Académie de Peinture et de Sculpture and began to show at the Salon. He was received as a full member in 1746. He sent to the Salon of 1748 pastel portraits of Louis XV (1710–1774), Queen Marie Leszczynska (1703–1768), and the Dauphin Louis (1729–1765), becoming for the balance of his long career one of the most highly placed, successful, and prolific portraitists in France. La Tour is famous not only for his highly finished and blended works, in which the strokes of the pastel crayons are not visible, but also for his lively and engaging préparations, which present a first, spontaneous record of the expression of a sitter taken from life.

Born in 1697, Jean-Charles Garnier d'Isle was admitted to membership in the Académie Royale d'Architecture in 1728. He must have owed his advancement in part to his wife, the daughter of the architect Claude Desgotz (1655–1732), who was in turn related to, and trained under, the celebrated French building and garden designer André Le Nôtre (1613–1700). Garnier's rise coincided with the ascendency of Madame de Pompadour (1721–1764) as Louis XV's mistress and his name is associated with the design of formal gardens at properties remodeled or constructed for her use. These include Crécy, which was bought by the King in 1746; Bellevue, where several years later she built a château; and the Hermitage at Fontainebleau. In 1747, Garnier was appointed director of the Gobelins tapestry manufactory; in 1748, he became an associate member of the Académie Royale de Peinture et de Sculpture and assumed the powerful post of controller of the Luxembourg and Tuileries palaces. He commissioned from La Tour a portrait that was exhibited at the Salon of 1751.

It may have been this one, but we shall never be sure, as there are three undated pastels by La Tour representing Garnier. Another of the same size shows him seated in a damask-upholstered chair and wearing a gray moiré silk coat (Fogg Art Museum, Cambridge, Mass.), and there is also a smaller head-and-shoulders study in that costume (Musée Antoine-Lécuyer, Saint-Quentin). The artist's impeccable handling of details of costume pales by comparison with the sitter's fleeting and perhaps self-satisfied smile.

License:
Courtesy of the Metropolitan Museum of Art
For more:
https://www.metmuseum.org/art/collection/search/438585