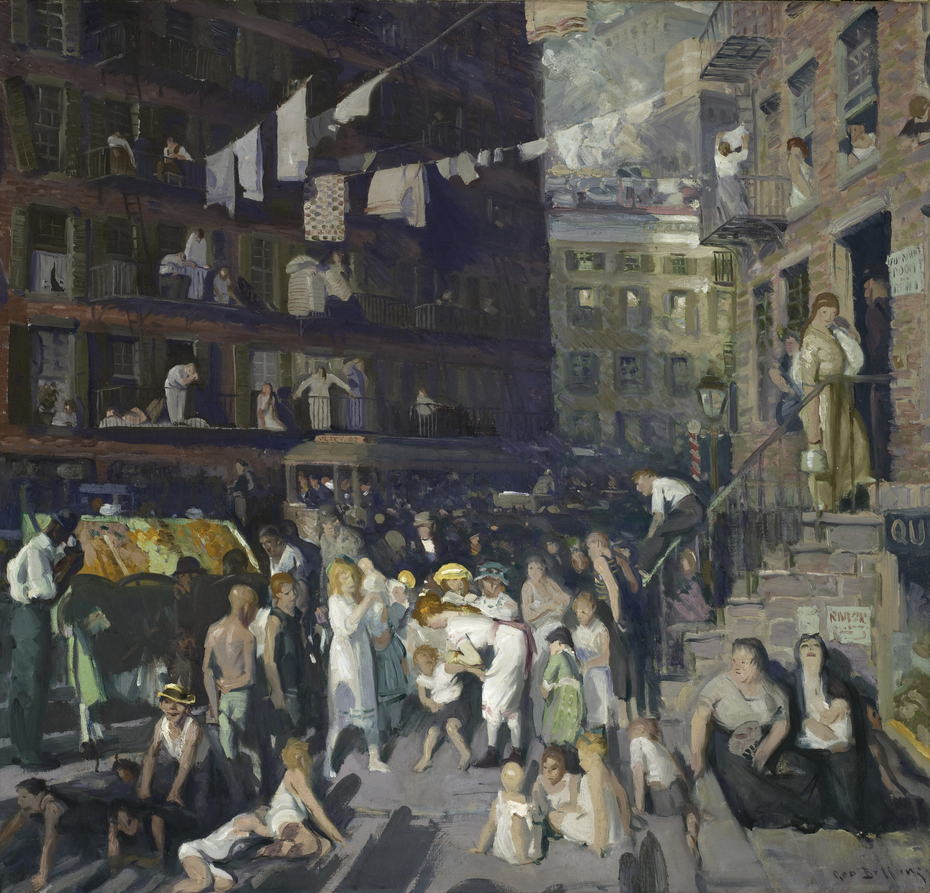 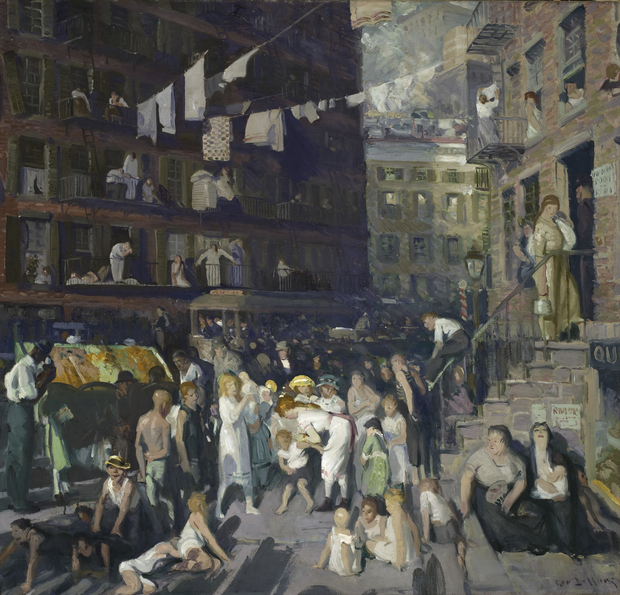 1913
Among the first paintings acquired by the Los Angeles County Museum of Art, Cliff Dwellers is still its best known and most often reproduced American painting.

A large part of the work’s attraction to students of American history has been the fact that it appears to stand out among Ash Can school paintings as a statement of strong social criticism. This interpretation has been derived not so much from the appearance of the canvas as from the fact that it is very similar to the drawing Why Don’t They Go to the Country for a Vacation? (1913, LACMA), executed by Bellows for the socialist journal The Masses and published as the frontispiece of its issue of August 1913.

Almost all the Ash Can school artists who contributed to The Masses stopped short of creating outright political statements. For the most part, they simply considered themselves to be realist artists, producing vignettes of urban life that fit with the journal’s alert, down-to-earth editorial tone. Their consciously artistic, realist drawings of indulgent social satire are distinctly different from the bald editorial cartooning that also appeared in The Masses. Their paintings were yet further removed from the editorial tone of the magazine. John Sloan, for instance, who occasionally contributed scathing editorial cartoons to The Masses, did not express any sense of social criticism in his paintings, which portray the energy and simple pleasures of the poor.

One cannot find in Cliff Dwellers any trace of a change in tone from Bellows’s other urban scenes, whose subject and spirit center on the excitement and bustling activity of the city and the surging vitality of its lower classes. The spirit of the scene is established by the innocent joie de vivre of the brightly lighted foreground group of young women and children, especially the bawling, grinning, brawling boys so familiar in Bellows’s works. Another prominent note is the mother ascending the stairs on the far right, so reminiscent of the hard-working homemakers of Daumier and Chardin. On the far left, the bright colors of a market cart attract the eye. Except for the large building in deep shadow, the effect is that of sunshine, with a stiff breeze lifting some of the laundry. The irregular angles of the streets and the streetcar’s "Vesey Street" destination sign suggest that this is a location in the Lower East Side of Manhattan between the Bowery and Catherine Slip below Chatam Square.

Bellows’s record book indicates that the painting was completed in May 1913. He wrote the title originally as Cliff Dwellers but then crossed out the definite article. As noted in his record book during April 1913, Bellows completed three drawings for The Masses, including the museum’s drawing reproduced in the August 1913 issue. Its title was recorded as Why Don’t They Go to the Country for a Vacation? but is also identified, in parentheses, as "(study for) Cliff Dwellers." The fact that the drawing reproduced in The Masses was completed at a time when Bellows very well may have been working on Cliff Dwellers raises the question of whether that drawing may originally have been made in preparation for the painting and then given a second life as a frontispiece in the magazine. On the other hand, the drawing is a transfer lithograph reworked with pen and ink, an uncharacteristic working method for Bellows, but one that he used for other Masses illustrations, which suggests that the drawing was done especially for the magazine. Read more (Curator Notes)