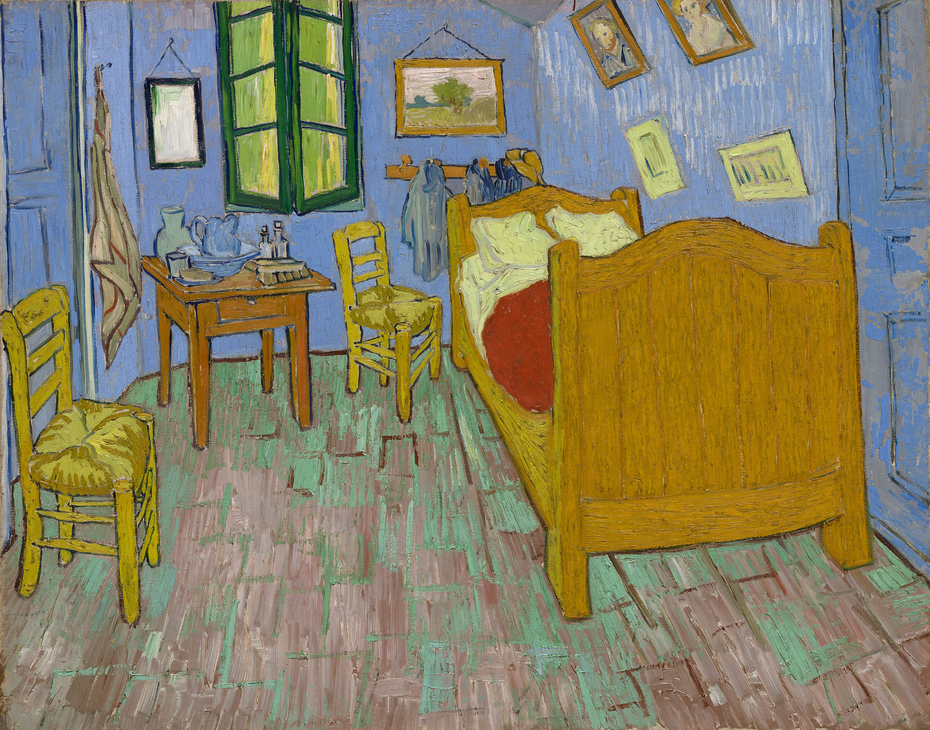 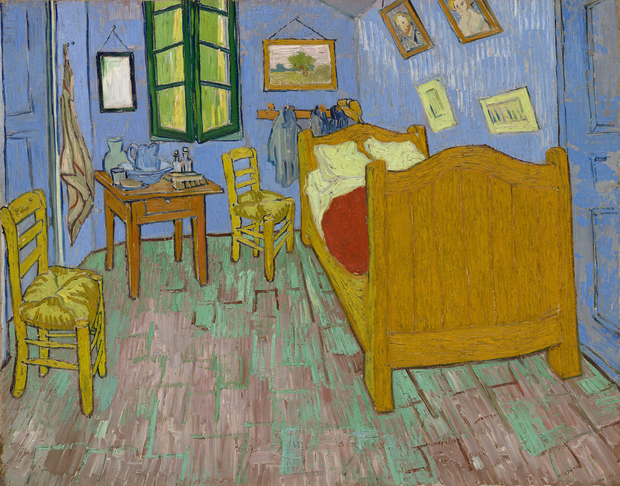 1889
Vincent van Gogh so highly esteemed his bedroom painting that he made three distinct versions: the first, now in the collection of the Van Gogh Museum, Amsterdam; the second, belonging to the Art Institute of Chicago, painted a year later on the same scale and almost identical; and a third, smaller canvas in the collection of the Musée d’Orsay, Paris, which he made as a gift for his mother and sister. Van Gogh conceived the first Bedroom in October 1888, a month after he moved into his “Yellow House” in Arles, France. This moment marked the first time the artist had a home of his own, and he had immediately and enthusiastically set about decorating, painting a suite of canvases to fill the walls. Completely exhausted from the effort, he spent two-and-a-half days in bed and was then inspired to create a painting of his bedroom. As he wrote to his brother Theo, “It amused me enormously doing this bare interior. With a simplicity à la Seurat. In ﬂat tints, but coarsely brushed in full impasto, the walls pale lilac, the ﬂoor in a broken and faded red, the chairs and the bed chrome yellow, the pillows and the sheet very pale lemon green, the bedspread blood-red, the dressing-table orange, the washbasin blue, the window green. I had wished to express utter repose with all these very different tones.” Although the picture symbolized relaxation and peace to the artist, to our eyes the canvas seems to teem with nervous energy, instability, and turmoil, an effect heightened by the sharply receding perspective. (Source: Art Institute of Chicago)

Label:
Vincent van Gogh's three versions of this composition are the only record he made of the interior of the Yellow House, where he lived while he was in Arles in the south of France. The house embodied the artist's dream of a "Studio of the South," a community of like-minded artists working in harmony to create art for the future. The first version of The Bedroom (Van Gogh Museum, Amsterdam) was one of the paintings Van Gogh made to decorate the house in anticipation of the arrival of his first guest, Paul Gauguin. "It's just simply my bedroom," he wrote, "only here color is to do everything ... to be suggestive here of rest or of sleep in general. In a word, looking at the picture ought to rest the brain, or rather the imagination." Gauguin's stay at the Yellow House would be fraught with tension: after two months, Van Gogh's self-mutilation and Gauguin's flight back to Paris ended the Studio of the South. Van Gogh made this second version of The Bedroom about a year after the first, while he was living at an asylum in Saint-Rémy.