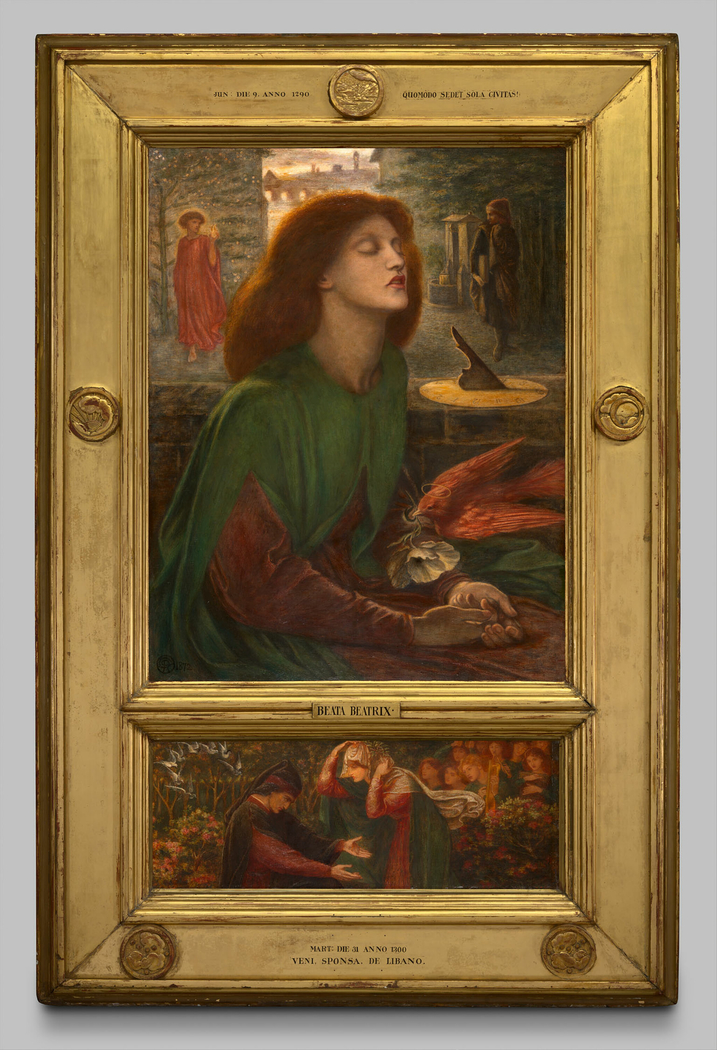 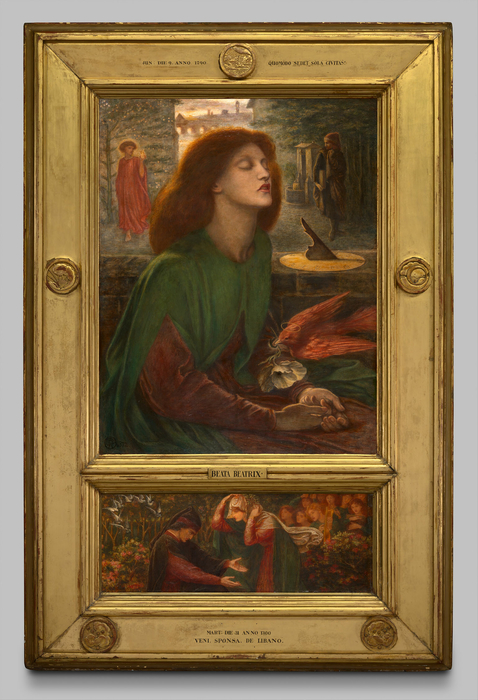 1871 - 1872
Both a poet and a painter, Dante Gabriel Rossetti was a founder of the Pre-Raphaelite Brotherhood, a circle of Victorian artists who were united in their regard for medieval aesthetics. Named after the thirteenth-century poet Dante Alighieri, Rossetti found inspiration for Beata Beatrix in his namesake’s La vita nuova (The New Life; 1295). Rossetti’s scene draws a parallel between Dante’s love for the late Beatrice and his own affection for his recently deceased wife and muse, Elizabeth Siddal. While this picture is a tribute to Siddal, Rossetti was adamant that it does not represent her death. Rather, the work portrays her as if in a trance or altered spiritual state.

Rossetti’s symbolism combines details from his personal life with those from La Vita Nuova. “The Dove” was the artist’s nickname for Siddal, and a haloed dove delivers her a white poppy, a symbol of laudanum—a derivative of opium—which caused her death by overdose. Above rises the Ponte Vecchio, the Florentine bridge that served as the setting of Dante’s poem. To the upper left is the personification of Love and to the right the figure of Dante, who doubles as a representation of Rossetti himself. The sundial shadows the number nine, the age Dante first saw Beatrice as well as the hour and day of her death. Rossetti designed the frame, and at the top right he inscribed, “How doth the city sit solitary.” This quote from La Vita Nuova refers to the city of Florence’s mourning of Beatrice.

Given the deeply personal nature of the work, Rossetti initially refused his patron William Graham’s request to create a replica, although he eventually yielded. The Art Institute’s painting is this second version, which is the only one to have a predella—the painted scene at the bottom of the frame—depicting Beatrice and Dante’s reunion in paradise. With this addition, Rossetti provides the medieval love story with a happy conclusion, perhaps suggesting that he, too, had begun to come to terms with his own profound grief. (Source: Art Institute of Chicago)