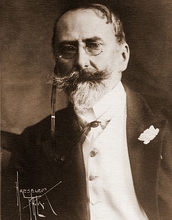 In Europe, Chase settled at the Academy of Fine Arts, Munich, a long-standing center of art training that was attracting increasing numbers of Americans. He studied under Alexander von Wagner and Karl von Piloty, and befriended American artists Walter Shirlaw, Frank Duveneck, and J(oseph) Frank Currier. Chase travelled to Venice, Italy in 1877 with Duveneck and John Henry Twachtman before returning to the United States in the summer of 1878, a highly skilled artist representing the new wave of European-educated American talent. Home in America, he exhibited his painting Ready for the Ride (collection of the Union League Club) with the newly formed Society of American Artists in 1878. He also opened a studio in New York in the Tenth Street Studio Building, home to many of the important painters of the day. He was a member of the Tilers, a group of artists and authors, among whom were some of his notable friends: Winslow Homer, Arthur Quartley and Augustus Saint Gaudens.
more >
15