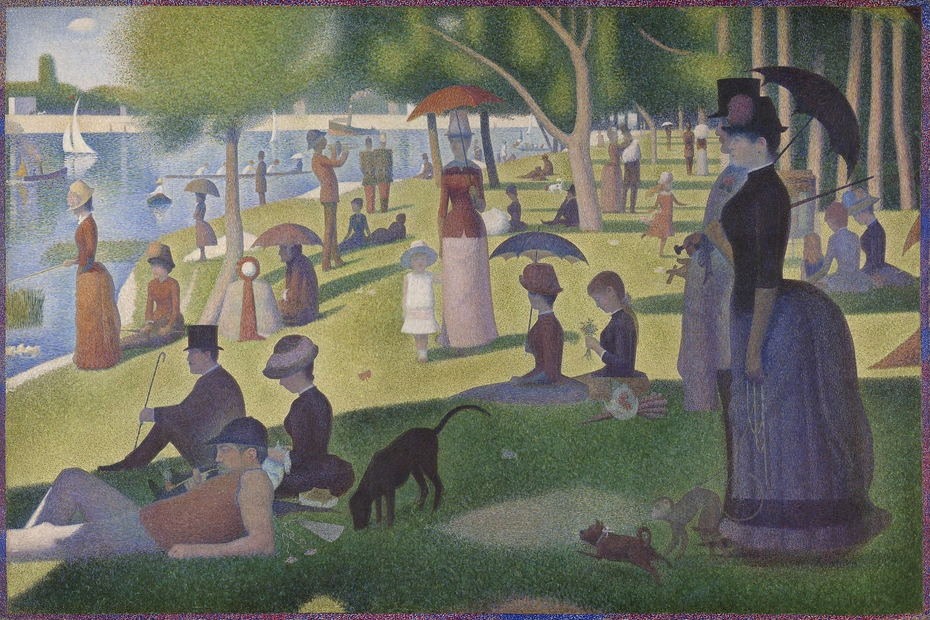 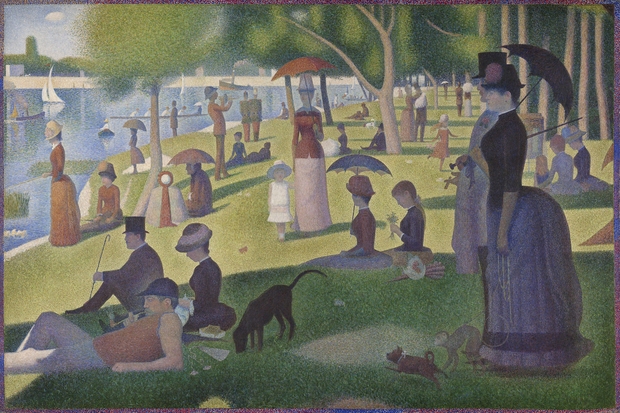 A Sunday Afternoon on the Island of La Grande Jatte

1884 - 1886
“Bedlam,” “scandal,” and “hilarity” were among the epithets used to describe what is now considered Georges Seurat’s greatest work, and one of the most remarkable paintings of the nineteenth century, when it was first exhibited in Paris. Seurat labored extensively over A Sunday on La Grande Jatte—1884, reworking the original as well as completing numerous preliminary drawings and oil sketches (the Art Institute has one such sketch and two drawings). With what resembles scientific precision, the artist tackled the issues of color, light, and form. Inspired by research in optical and color theory, he juxtaposed tiny dabs of colors that, through optical blending, form a single and, he believed, more brilliantly luminous hue. To make the experience of the painting even more intense, he surrounded the canvas with a frame of painted dashes and dots, which he, in turn, enclosed with a pure white wood frame, similar to the one with which the painting is exhibited today. The very immobility of the figures and the shadows they cast makes them forever silent and enigmatic. Like all great master-pieces, La Grande Jatte continues to fascinate and elude.

In his best-known and largest painting, Georges Seurat depicted people relaxing in a suburban park on an island in the Seine River called La Grande Jatte. The artist worked on the painting in several campaigns, beginning in 1884 with a layer of small horizontal brushstrokes of complementary colors. He later added small dots, also in complementary colors, that appear as solid and luminous forms when seen from a distance.

Seurat's use of this highly systematic and "scientific" technique, subsequently called Pointillism, distinguished his art from the more intuitive approach to painting used by the Impressionists. Although Seurat embraced the subject matter of modern life preferred by artists such as Claude Monet and Pierre-Auguste Renoir, he went beyond their concern for capturing the accidental and instantaneous qualities of light in nature. Seurat sought to evoke permanence by recalling the art of the past, especially Egyptian and Greek sculpture and even Italian Renaissance frescoes. As he explained to the French poet Gustave Kahn, "The Panathenaeans of Phidias formed a procession. I want to make modern people, in their essential traits, move about as they do on those friezes, and place them on canvases organized by harmonies of color." Some contemporary critics, however, found his figures to be less a nod to earlier art history than a commentary on the posturing and artificiality of modern Parisian society.

Seurat made the final changes to La Grande Jatte in 1889. He restretched the canvas in order to add a painted border of red, orange, and blue dots that provides a visual transition between the interior of the painting and his specially designed white frame.