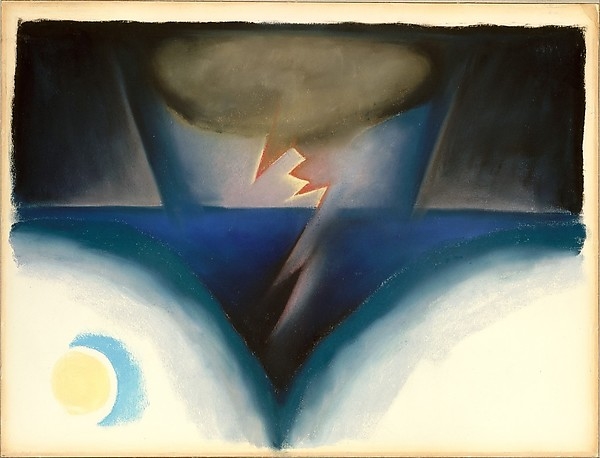 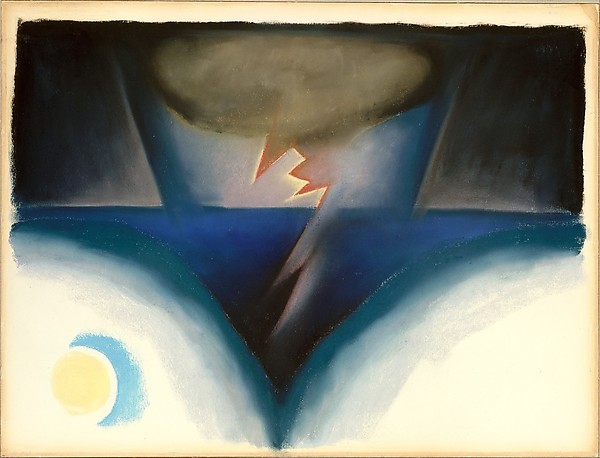 1922
Georgia O'Keeffe was born on a farm near Sun Prairie, Wisconsin. Between 1905 and 1916 she studied art at the Art Institute of Chicago, Art Students League of New York, University of Virginia, and Teachers College of Columbia University. Her intention was to become an art teacher, and between 1908 and 1917 she taught studio classes at schools in Virginia, Texas, and South Carolina. In 1916, O'Keeffe's drawings first came to the attention of Alfred Stieglitz (the important photographer and influential promoter of modern art), whom she married in 1924. Until his death in 1946, he regularly exhibited O'Keeffe's paintings and drawings at his New York galleries, which helped establish her reputation as a leading American artist.

For more than seventy years O'Keeffe painted prolifically, and almost exclusively, images from nature distilled to their essential colors, shapes, and designs. Prior to 1929 she derived her subjects from her life in New York City (buildings and city views) and from long summers in the country at Lake George, in upstate New York (flowers and landscapes). After 1929, when she made the first of many extended trips to New Mexico, her interest shifted to objects and scenery that characterized the American Southwest (bones and mountains). In 1949 the artist moved to New Mexico, where she resided until her death at age ninety-eight in 1986.

"A Storm" is a sumptuous pastel that captures the awesome sight of a raging electrical storm over water. O'Keeffe created a jolting contrast between the deep blue pastel of the water and sky, smudged and velvety, and the sharp angular bolt of red lightning outlined in yellow. This dramatic scene, which she most likely witnessed at Lake George, includes the surprising appearance of a full moon reflected in the lake at lower left. Although O'Keeffe's pastels were exhibited often during the 1920s and 1930s, they represent a less familiar aspect of her oeuvre. (Source: The Metropolitan Museum of Art)

Size:
18 1/4 x 24 3/8 in. (46.4 x 61.9 cm)
Medium:
Pastel on paper, mounted on illustration board
License:
Courtesy of The Metropolitan Museum of Art
For more:
http://www.metmuseum.org/collection/the-collection-online/s…