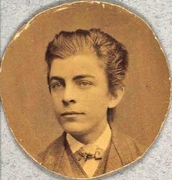 He began his art studies at the Royal Danish Academy of Fine Arts, but stayed for only a year, then switched to the Kunstnernes Frie Studieskoler, where he studied under the supervision of P.S. Krøyer. It was there he became friends with Vilhelm Hammershøi and took photographs that became the basis for some of Hammershøi's early paintings. He was, in fact, one of the earliest Danish painters to use photography as an artistic medium.

In 1891, he moved to Skagen, where he became acquainted with the Skagen Painters, and remained there until 1893. It was in Skagen that he began his intensive study of the effects of light.

In 1894, he went to Paris to join his brother, Tyge, who was an art collector; then settled in Fontainebleau in 1896. He continued his studies of light, producing a series of over thirty works with the sun's direct light as their theme; many depicting the sun as rises, shining through the trees. Sometimes, he would briefly stare at the sun, to recreate the lights and colors induced in his retina. He soon became known as "Le peintre du Soleil" (The painter of the sun).

Although largely forgotten today, he was once a familiar figure at exhibitions, including the Charlottenborg Spring Exhibition and the Expositions Universelles of 1889 and 1900.

Throughout his life, he suffered from bipolar episodes. In 1901, he was admitted to the psychiatric hospital in Aarhus and remained there until his death in 1905.
more >
4