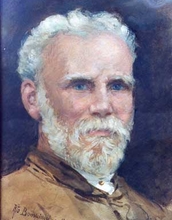 He rose to become professor and president of the Accademia di San Luca in Rome.[5] Augusto Bompiani, his son, was also a painter. [source]
more >
3