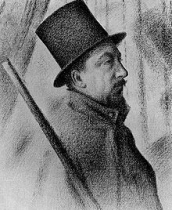 Paul Victor Jules Signac (11 November 1863 – 15 August 1935) was a French Neo-Impressionist painter who, working with Georges Seurat, helped develop the Pointillist style.
Paul Signac was born in Paris on 11 November 1863. He followed a course of training in architecture before deciding at the age of 18 to pursue a career as a painter after attending an exhibit of Monet's work. He sailed around the coasts of Europe, painting the landscapes he encountered. He also painted a series of watercolors of French harbor cities in later years.