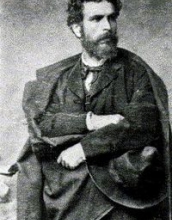 Nikolaos Gyzis (Greek: Νικόλαος Γύζης, pronounced [ɣizis]; 1 March 1842 – 4 January 1901) was considered one of Greece's most important 19th-century painters. He was most famous for his work Eros and the Painter, his first genre painting. It was auctioned in May 2006 at Bonhams in London, being last exhibited in Greece in 1928. He was the major representative of the so-called "Munich School", the major 19th-century Greek art movement.