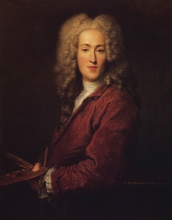 Nicolas Lancret's (b. 1690, Paris - d. 1743, Paris) early career never indicated his future renown as Paris's best-known practitioner of the fête galante. After training as an engraver, he apprenticed to a moderately successful history painter. By 1708 he was studying at the Académie Royale, from which he was expelled for bad behavior. Probably because of the popularity of Jean-Antoine Watteau's elegant new fêtes galantes, Lancret chose to join the workshop of Watteau's teacher Claude Gillot. Lancret even may have encountered Watteau himself in 1712.

By 1719 Lancret was an Académie Royale member in the fête galante category. His commercial success exploded in the early 1720s, after Watteau's and Gillot's deaths made him the leading source for such pictures. Under Louis XV's enthusiastic patronage, Lancret's paintings adorned the walls of numerous royal residences, including Versailles.

While Lancret's subject matter derived from both Watteau and Gillot, his rich colors, such as pastel yellows combined with rich poppy reds, were uniquely his own. He painted over seven hundred pictures, including allegorical cycles and portraits, which he often depicted as genre scenes. Also a skilled draftsman, he worked in red chalk or, like Watteau, in the trois crayons technique. His complex and often humorous narratives influenced François Boucher, William Hogarth, and Thomas Gainsborough.