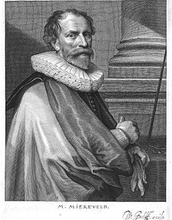 Michiel Jansz van Mierevelt (1566-1641)
Van Miereveld was a pupil of artist Anthonie Blocklandt of Utrecht. After a two-year apprenticeship, he returned to his native Delft. He received commissions for portraits from the stadholder court in The Hague: including Prince Maurice and members of the Orange family. This led to commissions from other wealthy families and diplomats. To meet the demand, Van Miereveld employed assistants, including his sons Pieter and Jan. His portraits became even more widely known when his son-in-law Willem Delff copied them as prints. Yet eventually he went out of fashion and was overtaken by rival portraitist Gerrit van Honthorst.
more >
1