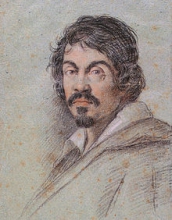 Caravaggio, byname of Michelangelo Merisi (born September 29, 1571, Milan or Caravaggio [Italy]—died July 18, 1610, Port’Ercole, Tuscany), Italian painter whose revolutionary technique of tenebrism, or dramatic, selective illumination of form out of deep shadow, became a hallmark of Baroque painting. Scorning the traditional idealized interpretation of religious subjects, he took his models from the streets and painted them realistically. His three paintings of St. Matthew (The Calling of St. Matthew, 1599–1600; The Martyrdom of St. Matthew, 1599–1600; and St. Matthew and the Angel, two versions, both 1602) caused a sensation and were followed by such masterpieces as The Supper at Emmaus (1606) and The Death of the Virgin (1606).