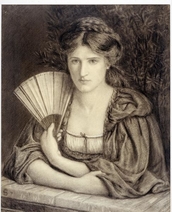 Marie Spartali (10 March 1844 – 6 March 1927) was the eldest daughter of a Greek merchant family in London, where her father, Michael Spartali, was Greek Consul General from 1866 to 1882. Although as a young girl she was liberally educated at home to unusually high standards-in languages, philosophy, history, and music, her wealthy background and the custom of the time restricted her to painting as an amateur watercolorist, even though both James McNeill Whistler and Henri Fantin-Latour were family friends. It was through another Greek family of patrons, the Lonides, that she came into contact with the group of artists and writers George Frederic Watts, Dante Gabriel Rossetti, Alfred Tennyson, and Julia Margaret Cameron, among them who formed the Little Holland House circle and who influenced her to paint professionally. Overcoming her father's reluctance, Marie Spartali became a pupil of Ford Madox Brown in 1864 at the age of twenty, and her first exhibited work was a self-portrait, The Lady Prays-Desire (Lord Lloyd-Webber Collection. London), inspired by a line of Spenser's Faerie Queene, shown at the Dudley Gallery in 1867.

By 1867 Marie Spartali was an intimate of the Rossetti circle, and under his influence she gradually extended her range from portraiture and Greek mythological and Shakespearean subjects to include pictures based on tales from Dante Alighieri and Boccaccio. In 1869 she met William James Stillman (1828-1901), the recently widowed founder of the American art magazine The Crayon; in 1871 she married him in the face of fierce opposition from her family and turned her hack on her wealth to make her way as an artist. The couple lived in Florence from 1878 until 1883, which was the most fruitful period of her development as an artist, and in Rome from 1889 to 1896, after her husband's appointment as The Times correspondent there. The success of her work was essential to the family's finances, and much of her prolific output, including scores of well-executed flower pieces, was frankly intended for the marketplace. Nevertheless, many of her more important paintings-such as Gathering Orange Blossoms (exhibited at the Grosvenor in 1879; now at St. Lawrence University); La Pensierosa, an outstanding portrait of her six-year-old daughter Euphrosyne [Effie] (1879; Elvehjem Gallery, University of Madison-Wisconsin); and The Meeting of Dante and Beatrice on All Saints' Day (1881, location unknown) date from her time in Florence.

The Stillmans retired to England in 1896, where William died in 1901. Marie continued to paint and to exhibit, mainly in New York and Boston, until her death in 1927.