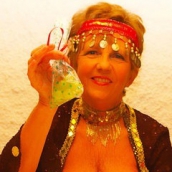 I grew up in Falmouth, Cornwall, England where, after leaving Falmouth High School, I spent a year at Falmouth School of Art. Then followed three years at Hornsey College of Art in London where I obtained a Diploma in Art and Design.

I then spent a post-graduate year at the West of England College of Art in Bristol where I gained an Art Teacher’s Diploma and a Certificate in Education of the University of Bristol. I lived and worked in Truro for over 30 years and became one of Cornwall’s most popular artists. My paintings have been exhibited in New York, Tokyo, Paris and London and have been bought by collectors from all over the world.

I have published 4 books which became local bestsellers – ‘The Natural History of a Westcountry City’, ‘Margaret Merry’s Cornish Garden Sketchbook’, ‘Sea & Sail’ and ‘Tidal Reaches’. In 2002 I moved to Spain and now live near the village of Las Negras in the Parque Natural de Cabo de Gata, Almeria – see my blog country house in spain . I now get my inspiration from the dramatic landscapes of Andalucia and its cities, old towns and villages. I have written and illustrated 3 children’s books – The Wise Old Boar, The Lonely Digger and The Adventure of Princess The Pony – which have been published in the USA. My paintings and prints can be viewed on the following blogs – margaretmerrypaintings, paintingsofgranada, paintingsofnudes.
more >
8