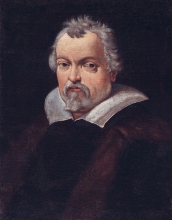 Born in Bologna in 1555, the son of a butcher, Lodovico Carracci grew up under the same roof as his cousins Agostino (1557-1602?) and Annibale (1560-1609), who became his closest collaborators. Probably while in his teens Lodovico became a pupil of the prominent Bolognese painter Prospero Fontana (1512-97). Lodovico's biographer, Carlo Cesare Malvasia, the richest source for information on the artist, noted he was slow to demonstrate his talent. Malvasia also reported that Lodovico furthered his education by traveling to Florence, Venice, Mantua, and Parma to study the great art of these cities. In 1578 Lodovico was inscribed as a master in the Corporation of painters of Bologna, and in 1582 he was named to the Council of the Corporation.

Lodovico's first known works date from the early 1580s when he was struggling to establish his position in Bologna. By the late 1580s Lodovico and his cousins were much in demand by local patrons and gaining reputations outside the city. Lodovico began a steady production of altarpieces, devotional pictures, and a smaller number of secular subjects for private patrons that would continue unabated until his death. By the mid 1590s the Carracci were Bologna's preeminent painters, and had attracted the region's best pupils, among them Guido Reni (1575-1642), Domenichino (1581-1641), and Francesco Albani (1578-1660).

Around 1582 Lodovico and his cousins Agostino and Annibale founded an academy that emphasized drawing from life and offered an opportunity to study optics, anatomy, and other subjects considered important to painters. The three artists collaborated on several fresco cycles in private palaces, the most important of which were a cycle of Jason and the Argonauts in the Palazzo Fava, completed in 1584, and a frieze depicting the Founding of Rome in the Palazzo Magnani, ca. 1590. They worked together so closely in their early years that in many cases scholars have found it difficult to distinguish between their hands. A conscious experimentation with style was a hallmark of the early Carracci Academy as the Carracci attempted to reform the chilly, abstruse elegance of the prevailing late mannerist style with an infusion of nature, comprehensibility, human warmth, and authentic expression.

In addition to designing the overall scheme and executing several scenes, Lodovico used the occasion to show off the achievements of the Carracci Academy, attempting to enlist the best of the former pupils who had gone to Rome, and assigning work to even the most modest of his pupils.

Until the end of his life--he died in 1619--Lodovico was showered with commissions from important patrons both in Bologna and elsewhere in northern Italy. His works commanded the highest prices. Critics have been less enthusiastic about his late style, which is emphatically didactic and oscillates, depending upon the subject, from the stern and austere to finely-spun ethereal effects. More important for subsequent generations of artists, and especially for Guercino, was Lodovico's work of the 1590s. The sensuous quality of his paint, the powerful, tangible evocation of solid form, the innovative chiaroscuro, and dynamic approach to composition opened a path toward the baroque style.