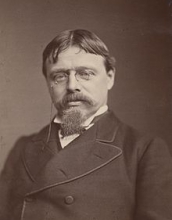 Dutch by birth, Sir Lawrence Alma-Tadema (b. 1836, Dronrijp, The Netherlands - d. 1912, Wiesbaden, Germany) initially specialized in Merovingian and Egyptian scenes, but after visiting Pompeii in 1863 he turned to archaeologically exact genre paintings of classical Greece and Rome. The British publication Punch called him a "marbellous artist" because of his skill at painting marble. Alma-Tadema moved to London in 1870 after his wife's death, and soon became a British citizen. His paintings are marked by clarity of color, exactness, and smooth finish; he imagined a Rome of splendor, sunlight, and gentle sentiment. Alma-Tadema inspired many followers and imitators, including Hollywood, which has consistently reproduced his vision of the ancient world on film.

Alma-Tadema's paintings offer no moral lessons, and his critics called them lewd and spiritually vacuous, but the public loved them, enabling him to enjoy a sumptuous lifestyle in a house modeled on a Pompeian villa. His second wife, painter Laura Epps, appeared in many paintings. Alma-Tadema became a Royal Academy member in 1879 and received the Order of Merit in 1905. Queen Victoria knighted him in 1899. Like Sir John Everett Millais, Alma-Tadema is buried in St. Paul's Cathedral in London.